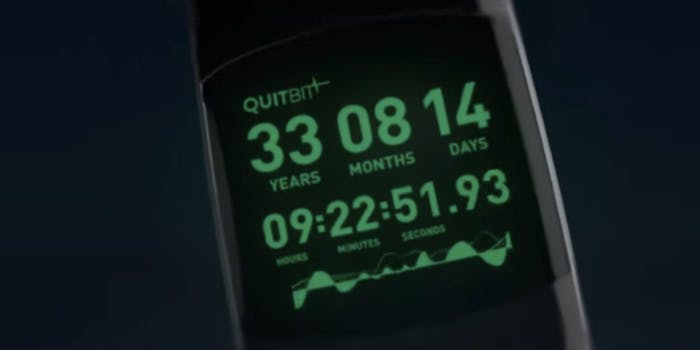 This ‘wearable’ counts down to your inevitable death

The Quitbit is a funny stunt promotion for a funeral company.

Here’s a startling new twist on the so-called quantified self movement: a wearable that counts down to your inevitable death.

A YouTube video shows off a gadget called a Quitbit, which helps one navigate his or her way to the end of one’s life. The Quitbit considers the wearer’s lifestyle habits—nonsmoker? jogger?—to calculate how much time the user has remaining, then displays it as a perpetual reminder of the inescapable hand of time.

Worn on the wrist, the gag device doesn’t display the time like a normal clock; instead it gives a precise indication of how much time you have left to live.

When that time is nearly up, the Quitbit will supposedly send the wearer a notification that it’s time to start saying one’s goodbyes.

This gadget portrayed in the video isn’t real. It’s a viral promotion to sell funeral pre-planning services by a Toronto-based cemetery and funeral operation called Mount Pleasant Group. But it’s not that far off from reality, either: The app Deadline uses Apple‘s Healthkit to provide an approximate “expiration” date, and there’s been a push lately for people to plan for their digital afterlives.

Rick Cowan, assistant vice president of marketing for Mount Pleasant Group, said in a statement: “[P]re-planning [a funeral] is a conversation that families should be having but many don’t because they park it in the ‘someday’ category. The Quitbit parody provides a clever way to place the subject of pre-planning in a current and topical arena to help the conversation along.”

Funeral preplanning is little more than what it sounds like: You make arrangements for the events immediately following your death before it seems necessary, outlining where and how you are to be buried. According to the National Funeral Directors Association, families who preplan their funerals “find comfort in knowing that the funeral reflects what their loved one wanted. It also gives them peace of mind to not have to make important decisions at a stressful time.”

The Quitbit is the Canadian company’s lighthearted attempt to introduce death as a topic of conversation amongst loved ones. Its thoughtfully designed website manages to imbue frank conversations about death with an existential hipness, and three short films put a meaningful spin on on this generally heavy topic.

While it may be viral marketing, Quitbit offers a substantive reminder that while death is certain, certainties can be planned for.

Screengrab via The Art Of Saying Goodbye/YouTube