Hate-crime or not, they want to set the arsonist free.

A Muslim group in Houston has forgiven the man who recently admitted to burning down one of their buildings.

In a statement provided to the Daily Dot, the Quba Islamic Institute said they had requested that prosecutors drop charges against Darryl Ferguson, 55, who admitted last Monday that he set a fire that destroyed one of the school’s three buildings.

“Our wishes have been conveyed to the prosecutor’s office, and it was made clear to us that the final decision will rest solely in their hands,” said Ahsan Zahid, Quba’s imam.

“A forgiving attitude is our Islamic duty.”

Zahid added that the Quba Institute has also decided to not pursue a civil case against Ferguson.

Described as a homeless transient with a lengthy criminal record, Ferguson turned himself in to police, who were canvassing the neighborhood near Quba’s burned out building. According to officials, the cause of the fire was “non-accidental” and was set using an incendiary agent.

In the days following the arrest, Zahid said that the police hadn’t notified the institute. They learned, instead, that a suspect had been apprehended from members of the press. 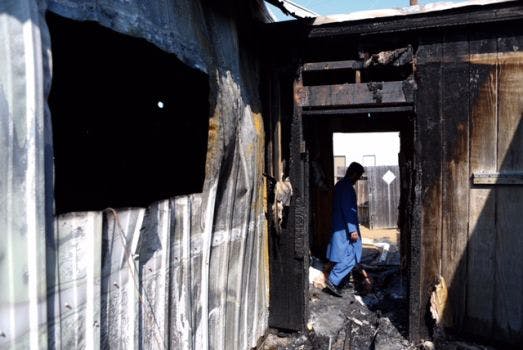 The remains of a burned out building

After the fire, local news reports speculated that a homeless person may have started the blaze while trying to stay warm. Ferguson offered that same explanation to police following his arrest four days later. A convenience store clerk subsequently came forward to report that Ferguson told him “that he hated Muslims, they got what they deserved, and things happen for a reason,” a court official said.

Since the incident, Quba has received overwhelming support, both locally and from around the world—from Christians, Jews, fellow Muslims, and atheists alike. A Presbyterian church in the area offered their facilities for Quba’s members to worship. “We were floored by the response,” Zahid told the Daily Dot.

“Burn all the others”

There was another kind of response, however. It was hostile, perhaps even violent, and directed at all Muslim-Americans.

“Islam has no place in the United States,” someone wrote on Quba’s Facebook page. “None of its institutes should exist in this country.” Another person wrote: “They need to the leave the U.S. before it’s too late.” And another: “Burn all the others.”

As for the motive behind the fire—if police determined a hate-crime had occurred—it would have no effect on the institute’s decision. “We believe very deeply that a forgiving attitude is our Islamic duty,” Zahid said.

“We would hope that through this small deed, we could help spread love and harmony upon this Earth.”