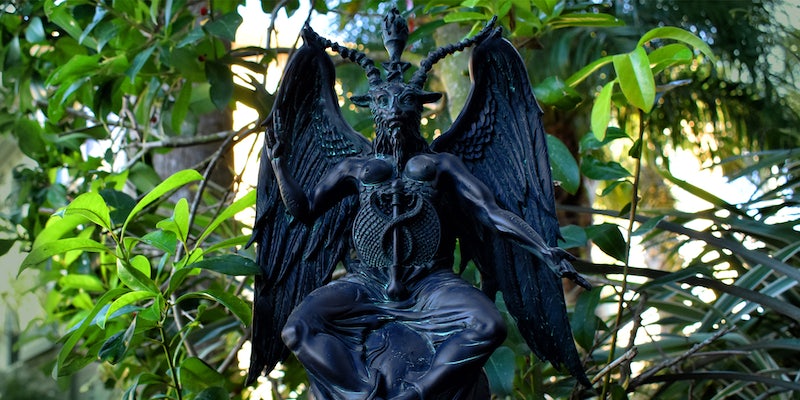 ‘They are hiding at least one half-eaten baby corpse’: QAnon world loses its collective mind over suit claiming abortion is a Satanic ritual

The Church of Satan denies that abortion is a Satanic ritual.

The latest lawsuit challenging restrictions on reproductive freedom is the weirdest one yet. It also inspired a frenzy of responses and served as fodder for QAnon conspiracy theorists.

Earlier this week, the Satanic Temple sued to block abortion bans in Idaho on the basis that it violates religious freedom. It filed a similar suit in Indiana.

The Satanic Temple, a nontheistic religious group some say are just organized trollers, claims that the “Satanic Abortion Ritual” is protected by the First Amendment. It asserts that forced birth is an unconstitutional seizure of property without compensation—that property being the uterus of the pregnant person. The temple further claims that forced pregnancy and birth is a form of involuntary servitude prohibited by the Thirteenth Amendment and has challenged abortion bans on religious freedom grounds.

“We believe securing our members’ access to abortion to be of the utmost importance,” the temple’s Director of Campaign Operations Erin Helian said in a statement. “Forcing people to go through pregnancy when they do not choose to is blatantly an overreach of these extremist officials’ religious dogmatism into politics, and [we] will not allow that to stand.”

Others have made similar claims that abortion is protected under religious freedom, and the American Civil Liberties Union filed a class-action suit in Indiana on the same principle. But asserting it’s a Satanic ritual is a novel argument. The temple’s case prompted other Satanists to weigh in and deny it.

On Tuesday, the Church of Satan, considered more of an authority on mephistophelean matters, tweeted from its verified account, “There is no such thing as a Satanic Abortion Ritual.”

It also blasted the move as a publicity stunt.

In an accompanying blog post from 2020, when the Satanic Temple purportedly first floated the idea that abortion is a Satanic ritual, the Church of Satan cautioned that the claim could inspire fears common among some Christians and QAnon conspiracy theorists that Satanists use abortion as a form of child sacrifice. QAnon conspiracists believe a cabal of pedophilic, cannibalistic Satanists controls the world.

“This latest stunt goes beyond simple headline chasing, giving ammo to religionists who would push to enact laws restricting individual freedoms as well as potentially putting the safety and lives of some people publicly identifying as Satanists at risk, as anti-abortion activists have been known to use violence to push their agendas in the past,” it wrote.

As predicted, anti-choice conservatives and QAnon conspiracists alike have seized on the claim that abortion is a Satanic ritual.

Steve Bannon wrote on Gettr, “But of course the ‘Satanic Temple’ sued in federal court to block abortion bans … did we ever mention our enemies are demonic.”

“Somebody should scrutinize ALL of these demonic ‘religious’ believers… I bet they are hiding at least one half-eaten baby corpse in their freezers,” wrote a member of a Telegram channel popular with QAnon conspiracy theorists.

A member of another QAnon channel opined that the suit is aimed at allowing “legalized Blood Sacrifice Rituals.” Still another wrote: “they just want their sacrifice to Baal.” Christians sometimes refer to Satan as Baal.

Online commentary is now littered with disinformation about abortion and claims that people who support reproductive freedom are evil.

“Worship of Baal and Moloch through child sacrifice originated in Babylon… The Collective West = New Babylon,” wrote a Twitter user who describes themselves as a Christian.

Although some support any effort to protect reproductive freedom, others fear the ramifications of likening abortion to a Satanic ritual.

“…[P]eople accuse Satanism of child sacrifices every day, so claiming to have an abortion ritual as a sacrament of Satanism will only reinforce Christian bigotry, especially those in positions of dictating public policy,” wrote one.