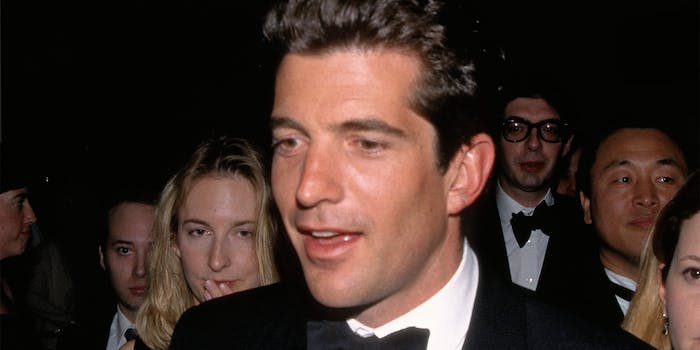 It's (probably) not gonna happen.

Despite having died in a plane crash in 1999, John F. Kennedy Jr. plays an outsized role in the mythology of the QAnon conspiracy theory.

An early Q post alluded to JFK Jr.’s death as being the “start” of Hillary Clinton’s political career, when she ran for the New York Senate seat he’d (supposedly) declared his intention to run for.

Of course, this isn’t true, as Kennedy had never expressed any public interest in running for office, and only unnamed sources speaking after his death claimed he did.

With that one post, the QAnon “research” machine kicked into action, dreaming up a fantastical theory whereby Kennedy faked his death in 1999 and has been laying low for almost two decades.

But when the time is right, he’ll reveal his status as living to the world, and play a central role in the new world to come after “the storm” sweeps away the deep state pedophile rings controlling the world.

QAnon’s JFK Jr. obsession has gone so far as to inspire a Q rival called “R” to toss out the theory that he and Trump were planning this entire thing from the beginning, and that Kennedy was going to Trump rallies in disguise.

Who is this guy? https://t.co/CFpjqgSuCn#QAnon #MAGA #WWG1WGA #TheStorm

The “JFK Jr. is alive” conspiracy has gotten a new boost by virtue of the calendar hitting Nov. 22, the 55th anniversary of the assassination of his father.

Q is extremely numerology-driven, and a variation on that number, 5:5, plays a major role in Q iconography. It’s also the term that radio operators use to denote their signal strength is at its highest.

So the 55th anniversary approaching has given a shot of hope to a movement that’s starved for action.

Many believe that the confluence of the “55” number and the references to John Kennedy Jr. will coalesce with nothing less than full disclosure of “the plan” and the beginning of the “great awakening.”

As proof of their claims, Q believers have picked through various clues and bits of ephemera to back up their narrative.

They claim that clues were left in various articles throughout the years, that Trump flew over John John’s crash site recently, and even that the grave of JFK has a road shaped like a Q around it. As with most of Q, it’s mostly random nonsense, stapled together to make something that looks like a pattern if you really want it to.

Another bit of Q numerology that backs up *something* happening on the 22nd is the end of the “Q Clock,” which lays out the minute hands of a clock and uses them to connect Q posts to each other.

The clock is a favorite “proof” of Q believers who use it to try and convince themselves that Q is following some kind of master plan, rather than making up a bunch of vague stuff that can be connected to anything because it’s so vague.

New Q… I typed in D5 in the Q search and I came across this one… "When does the clock run out" Answer: November 22nd, Thanksgiving Day! It's going down soon… #PatriotsUnited #QAnon #WWG1WGA #TheRainMakers #GreatAwakening #D5 @POTUS pic.twitter.com/5G6JibGoJE

Nov. 22 is indeed the last day on the currently circulating Q clock. Since whoever made the initial meme of the clock is unknown, it’s impossible to ask them why.

But it seems likely that it was done on purpose, because the 22nd would be the 55th anniversary of the Kennedy assassination, and they simply wanted to make their meme look more profound than it really is.

In fact, while some acolytes were crowing over the clock ending on the 22nd, someone else made a new clock that goes on until well into May.

Q has, of course, not predicted anything specific for the 22nd. Which is probably a plus for his followers, because his track record of predictions is awful.

But what about the original claim, that JFK Jr. is alive? Could it possibly be true?

Science dictates that the burden of proof lies with the person making the claim, not the skeptic who disbelieves it. And naturally, no Q believer has been able to present such proof.

However, it’s extremely unlikely. Contrary to popular claims on conspiracy websites, Kennedy was not an experienced pilot and had just 72 hours of solo flying time. He took his plane up on a hazy late evening when visibility was low, then became disoriented by the flat terrain of the Atlantic Ocean and the lack of visible light.

His body was also recovered, as were the bodies of those in the plane with him.

But there’s is the extremely remote possibility that John F. Kennedy, Jr. faked the whole thing, and has been hiding in some luxurious bunker somewhere, plotting out his return to public life with Donald Trump while taunting us with clues.

After all, we can’t prove it’s not true. At least not until Friday.