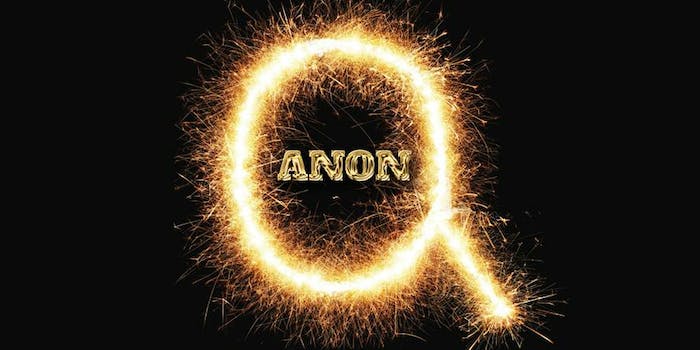 It's become a certifiable hit. But why?

Once thought to be safely relegated to the realm of 4chan, Voat, and other nether reaches of the internet, the QAnon conspiracy theory has gone pop.

Q fans have rocked merchandise at rallies for President Donald Trump, and now a fictional novel about Q is charging up the rankings on Amazon’s bestseller list.

First spotted by NBC News’ Ben Collins, QAnon: An Invitation to the Great Awakening, is considered a “hot new release” by Amazon and is currently the ninth-most popular politics book.

A book that pushes the conspiracy theory Qanon climbed within the top 75 of all books sold on Amazon in recent days, pushed by Amazon’s algorithmically generated recommendations page.

“QAnon: An Invitation to the Great Awakening,” which has no stated author, ranked at No. 56 at press time, was featured in the algorithmically generated “Hot new releases” section on Amazon’s books landing page. The book claims without evidence a variety of outlandish claims including that prominent Democrats murder and eat children and that the U.S. government created both AIDS and the movie Monsters Inc.

The QAnon conspiracy theory has been the most bizarre phenomena that’s flourished under Trump. In it, it is believed a secret government insider, perhaps Trump himself, is posting missives online about his plans to take down the deep state, which has been secretly protecting pedophiles (mainly Democrats), within the highest levels of the government.

It is full of holes and completely untrue, but that has not stopped its devotees from spreading the gospel of Q. It’s reached a great number of people and spurred acts of violence.

An yet, it’s the ninth-best-selling politics book on Amazon, and the 25th best overall, showing that the conspiracy has no signs of losing steam.

Amazon declined to comment to NBC about the book. You can read all of NBC’s report here.