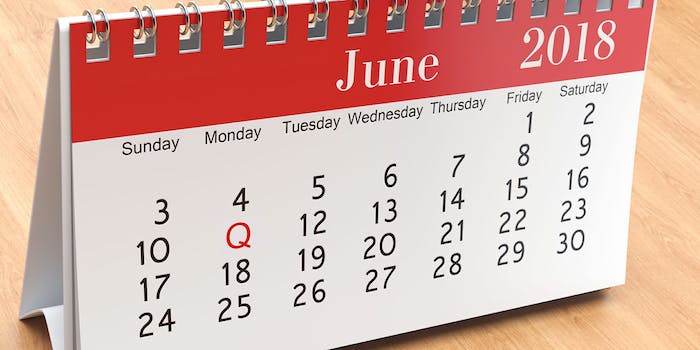 Today could be the day.

One of the hallmarks of the Q Anon conspiracy theory is that the major event that’s supposed to happen keeps getting moved down the calendar.

Believers have theorized all kinds of days that would bring the long-awaited “storm” that’s been coming since October. Some were thrown out by the anonymous poster “Q” themselves, others deduced from the “intel” that Q has dropped.

But for the last few weeks, one date has been the focus of Q believer’s posts and theories. Today, June 11.

According to them this is the day that Q has been talking about for months, as revealed by various clues and hidden messages in his/her posts.

However, it’s not actually clear what is supposed to happen. Some think it’s pain or “devastation” for the deep state. Others believe it will involve the FBI, Julian Assange, net neutrality, or mass arrests. It’s fairly up in the air.

This is entirely in keeping with the ethos of what Q Anon has been from the beginning: vague assertions that something huge was about to happen to take down the deep state, only for it to be delayed, again and again.

So what, if anything, is going to happen on June 11?  Here are some of the most prominent theories:

The DOJ Inspector General’s report was supposed to be issued

The biggest event that was scheduled to take place on June 11 was the release of the Department of Justice Inspector General’s report on how the FBI conducted the investigation of Hillary Clinton’s email server, and in particular, director James Comey’s conduct during the final days before the election.

Both the report and a Senate hearing about the report were scheduled for today, after being moved from June 5.

It’s obviously not known what will be in the report, which might run as long as 500 pages. It could be extremely damning toward Comey and other high-ranking figures, including former AG Loretta Lynch, as well as Hillary Clinton herself. Indeed, a leaked portion of the draft report referred to Comey’s behavior in going public with his investigation’s findings as “insubordinate.”

There are also reports that the DOJ IG is investigating supposed “abuses” of the FISA process, a constant issue for conservatives who believe the Trump campaign was being illegally surveilled by the FBI.

The Department of Justice has been a constant source of consternation for and mean tweets from Trump, who has complained publicly about it being biased, slow, and run by “an Obama guy,” Inspector General Michael Horowitz.

But even if Horowitz finds foundational rot in the FBI, it’s not clear what will actually happen because of the report that justifies the anticipation of conspiracy theorists.

Horowitz has no prosecutorial power—he can only report to Congress and make referrals for criminal prosecution. Comey might have violated department protocol, but that’s not the same thing as breaking the law. Beyond that, there’s just as much chance that the report will go the way of the infamous Devin Nunes memo: a supposed hammer against the deep state that wound up being a laughing stock.

If the report finds corruption in the FBI, it will only fit with the confirmation bias of those who believe the FBI to be corrupt. If it doesn’t, it will be thought of as corrupted by the deep state.

One final sticking point for the June 11 theory is that the release of the report was moved again, this tine to June 14, with the hearing to follow a few days later.

But as with everything Q Anon related, that date was just folded into the conspiracy—after all, June 14 is President Trump’s birthday.

The on-again, off-again meeting between President Trump and North Korean leader Kim Jong-un is, for the moment, on again. It’s slated to take place in Singapore on June 12, likely starting that morning.

Of course, June 12 in Singapore will be June 11 in the U.S., which might give some credence to the Q Anon theory that the “big day” will coincide with the summit.

But Q Anon is rarely that simple or clear.

In fact, the general consensus among believers is that the summit has already taken place, and that Kim and Trump have made a secret deal to bring peace to the Korean Peninsula.

A drop from Q on March 8 used a Trump tweet from November, posted as he was flying back from a two-week Asia trip on Nov. 14, to insinuate “deal made. Clowns out. Strings cut.” 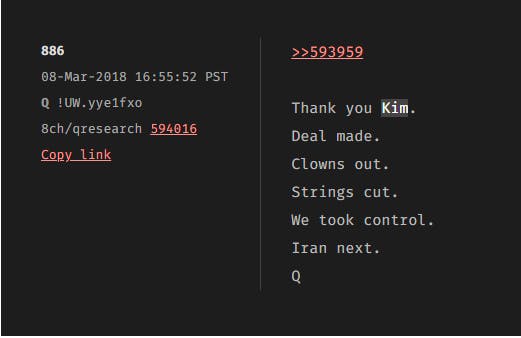 Trump had originally planned to cap off the Asia trip with an appearance at a major summit in Manila that day, then announced that he wouldn’t be attending the summit, only to reverse course and announce that he was attending. He flew to Manilla, but then left after the event was delayed several hours.

A subsequent Q post, of a grainy picture of the Marina Bay Sands Hotel in Singapore, was seen as “proof” that the summit already took place, that Q was there, and that all of it was a show for the public in order to throw the deep state off balance.

So was the strange sequence of events in November actually cover for Trump making a secret rendezvous with Kim Jong Un to negotiate a peace treaty?

It’s a fascinating theory, but it’s completely without real evidence.

It’s almost impossible for the president to move around quietly, due to the need for multiple aircraft, dozens of vehicles, and thousands of support personnel and security. All of these people would need to either be kept in the dark or sworn to secrecy about what they were “really” doing, and it’s not plausible to keep this deception going for nearly a year.

The alternative is that Kim could have met Trump in Manilla, but there’s no indication Kim Jong-un left North Korea in November. In fact, he’s only ever left the country once since taking control, which was in March for a meeting with Chinese Premier Xi Jinping. Such a departure would have been an international story, and impossible to keep secret.

Beyond the logistical impossibility of a secret summit, there’s also the question of motive. Why keep the summit secret, why go through the theater of a fake summit, and why wait nearly a year to announce a deal?

Trump and Kim both thrive on the image they’ve created for themselves, and if there were a deal between the US and North Korea to draw down nuclear weapons, it would be a crowning achievement. What possible reason is there to sit on it for months?

Another theory floating around Q analysis boards is that June 11 will be the day that Q is unmasked, possibly revealing himself to be WikiLeaks founder Julian Assange.

Supposedly, Assange is going to be leaving the Ecuadorian Embassy in London today, vacating the place he’s been holed up for years. But this appears to be a rumor, with no confirmation from either Assange or any news source.

Beyond that, there’s no real proof tying Q to Assange, and Q actually being Assange goes against almost everything else the account has posted.

June 11 is also the day that the current FCC rules on net neutrality are set to expire, though that doesn’t seem to be Q Anon’s bailiwick.

Finally, June 11 has been theorized as the day that the “35,000 sealed indictments” will be revealed, with mass arrests of Democrats and sex criminals to follow. But that conspiracy is massively overblown, and represents not indictments, but court documents.

So is it any of these? All of them? Something else even worse?

Most likely, today will be yet another day that disappoints Q Anon followers, with nothing of note happening, and the can being kicked down the road yet again. In fact, with the IG report being moved, one can see the can already flying through the air.

This is a common theme to the prosperity scams that begat Q: the big event is always just about to happen, and somehow, never actually happens.