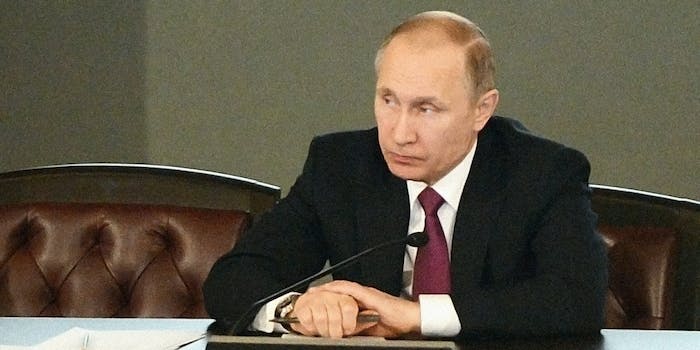 Putin also denied that Trump shared any sensitive information at the meeting.

Russian President Vladimir Putin has offered to give Congress a transcript of a meeting President Donald Trump and Russian Foreign Minister Sergey Lavrov—a meeting that has drawn intense criticism after it was revealed that Trump may have shared sensitive intelligence information with Russian officials.

Putin spoke about the offer during a press conference in Sochi, Russia, according to CNN, and denied that Trump shared any intelligence.

“We are prepared to go there and explain our point of view to Congress if necessary,” he said.

In an interview with CNN, Rep. Adam Schiff (D-Calif.), the ranking Democrat on the House Intelligence Committee, said Putin’s offer “raises questions” about why Russia was recording the meeting with Trump, adding that the situation gets “more and more baffling every day.”

“After a very striking couple of days, yet another twist in the road,” Schiff said. “I think the last thing the president probably needs right now is for Vladimir Putin to be vouching for him.”

Trump confirmed he shared intelligence with the Russian officials in a series of Tuesday morning tweets, adding that he has the “absolute right” to share the information.

The Oval Office meeting, which also featured Russian Ambassador Sergey Kislyak, was already under scrutiny as it occurred one day after Trump fired FBI Director James Comey in the midst of the agency investigating the Trump campaign’s possible ties to Russia. United States press members were barred from the meeting; however, the Russian government and Russian Embassy released several photos of Trump shaking hands with Lavrov and Kislyak.

On Tuesday, National Security Adviser Gen. H.R. McMaster called Trump’s comments to the Russian officials “wholly appropriate” and seemed to imply that the president wasn’t aware of the intelligence being classified.