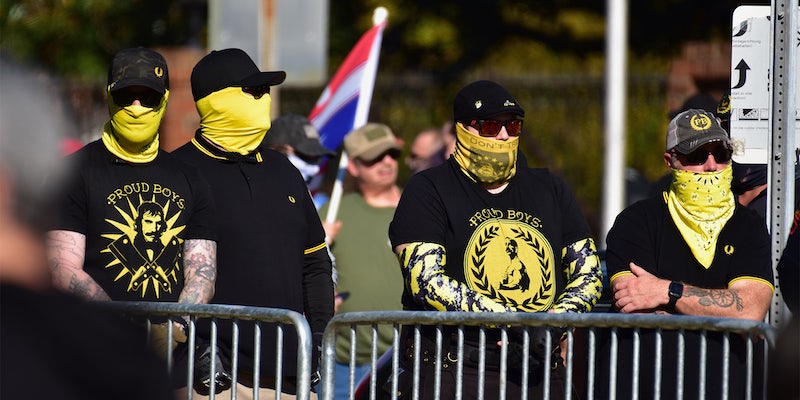 An alleged FBI file about an informant with the Proud Boys on Jan. 6 galvanizes the far-right

They may have crowned a new Ray Epps.

Right-wing media is in an uproar over a purported Federal Bureau of Investigation (FBI) file they believe exonerates the Proud Boys of wrongdoing at the Capitol riot. The file was first published by the far-right Gateway Pundit, which says it received the file from a whistleblower. It contains the account of an alleged FBI informant who supposedly infiltrated the Kansas Proud Boys and traveled with them to Washington, D.C. on Jan. 6, 2021. The purported file includes transcripts of interviews, photos, and an FBI report about its communications with this informant.

According to the Gateway Pundit, the informant’s account of the Capitol riot to the FBI proves the Proud Boys “were innocent.” It says the document reveals that the FBI and Justice Department “all lied” about the Proud Boys, rounding them up in a conspiracy.

This would indeed be newsworthy if it were true. But assuming the file is legitimate—and there’s currently no evidence it is faked—even a charitable reading of its contents doesn’t quite back up many of the Gateway Pundit’s claims.

They seem to be attempting to cast the alleged informant, James Ehren Knowles, as the new Ray Epps.

Epps is at the center of many baseless conspiracy theories that the FBI was behind the Capitol riot. Epps has been falsely scapegoated as the leader of a nonexistent FBI operation to incite the riot to vilify former President Donald Trump and his supporters. Epps recently told the New York Times that these lies, which have been repeated by Tucker Carlson and other prominent Republicans, have put him through “hell.” He said he’s moved out of state and is taking other measures to avoid being recognized.

The way things are going, Knowles may soon find himself in the same position. Right-wing media is littered with stories about him and the file.

Neither Knowles’ identity nor the file has been independently verified. The FBI’s Kansas field office didn’t return a phone call seeking to confirm its veracity. The Daily Dot was unable to locate contact information for Knowles.

The file does appear similar to law enforcement documents. It includes a letter purportedly from an FBI agent to a federal prosecutor, both of whose names and titles matched those included in the letter during the relevant time period. It also uses language and references laws in a manner consistent with law enforcement communications.

On Monday, the Gateway Pundit dropped its first story about Knowles and the file.

“THEY ALL LIED AND WE HAVE PROOF! Highly sensitive DOJ Jan 6. documents leaked to the Gateway Pundit–FBI confidential human source INFILTRATED Proud Boys, ran FBI operation on J-6, reported they were INNOCENT!”

Even if every statement in the file is taken as true, it doesn’t back up the Gateway Pundit’s reporting. It takes some passages out of context, neglects to report on statements that directly contradict its claims, and inaccurately characterizes Knowles’ role with the Proud Boys.

The Gateway Pundit’s claim that the file proves that the Proud Boys are innocent of wrongdoing in the Capitol riot seems largely based on a single text message Knowles reportedly sent to his FBI handler during the riot. “PB did not do it, nor inspire,” Knowles supposedly wrote. “The crowd did it as a herd mentality.”

The informant appears to have been merely referring to breaching barriers around the Capitol. When the agent asked what he meant, he responded, “Barriers down at capital [sic] building crowd surged forward, almost to the building now.”

That happened at noon central time, well before the actual Capitol was breached. But that phrase is used to indicate the Proud Boys weren’t responsible for essentially anything on Jan. 6.

The Gateway Pundit fails to mention that elsewhere in the file, Knowles changed his mind about who first breached the barriers.

“The CHS stated he was marching with other Proud Boys and at the time did not think the Proud Boys had anything to do with taking down the barrier. However, the CHS explained that she/he change[d] their opinion when they saw the video of Billy and the Konold girl in the front taking down the first barrier.” (“CHS” refers to a confidential human source, the FBI’s term for an informant.)

This apparently refers to Felicia Konold, who has reportedly claimed the Kansas Proud Boys recruited her. Konold has been charged over the riot. Prosecutors say she bragged about leading rioters. She’s pled not guilty to charges.

It’s not known who “Billy” is. After the first Knowles story, Gateway Pundit published a list of “victims” whose lives have been “ruined” because the FBI “lied,” which it says Knowles’ FBI file proves. The list includes Konold and a William Chrestman of the Kansas Proud Boys.

The file implies that Knowles didn’t view “Billy” and Konold as innocent bystanders during the riot, however.

He reportedly told the FBI, “Prez gave out a code of conduct to everyone wanting to go and Billy violated that.” He also says that as the violence unfolded, Billy pointed at “the Konold girl” and said “they started this.”

The “code of conduct” appears to be an admonishment that members of the Kansas Proud Boys act in a defensive manner and not instigate violence. “Also let everyone know we will NOT be bailing anyone out so don’t act stupid,” it states immediately after the line about the code of conduct.

That the informant notes that Proud Boys did commit violent acts that day isn’t addressed in the Gateway Pundit’s post claiming the document exonerates the Proud Boys. It instead focuses on the fact that the FBI’s confidential informant was a “rat.”

“Every single Kansas City Proud Boy and other individuals that the rat reported to his handlers in the document dump are indicted and facing decades in prison EVEN THOUGH THE FBI INFORMANT THAT WAS WITH THEM THAT DAY REPORTED THEIR INNOCENCE!” the post states.

On Tuesday, the Gateway Pundit reportedly even sent a letter to Rep. Liz Cheney (R-Wy.) that said, “You knew FBI assets confirmed Proud Boys did not commit sedition yet you suppressed the information.”

Several leaders of the Proud Boys, including former national leader Enrique Tarrio, have been charged with seditious conspiracy for their alleged role in the Capitol riot. They’ve pled not guilty. Neither of the three people in the FBI document are charged with sedition.

The Gateway Pundit also claims that Knowles was a high-level Proud Boy when the file suggests he’s at best a lieutenant in the Kansas Proud Boys and possibly even just a member of the rank-and-file of that chapter.

The Gateway Pundit says, via someone who supposedly knew Knowles, that he “had gained the group’s total trust and was included in all group communications.”

Knowles’ supposed communications with the FBI don’t indicate that he had any knowledge of top Proud Boys’ plans that day, however.

The top Proud Boys leaders that day allegedly had a detailed plan to take over government buildings and target representatives during the Capitol riot. That plan came to light when Zachary Rehl, who was president of the Philly Proud Boys, filed it in court last month. Rehl is among the Proud Boys leaders who’ve been charged with seditious conspiracy over the riot. That document includes one section for the public and one for internal use.

Knowles’ purported conversations with the FBI don’t indicate he was aware of any such plans. Based on his chapter leader’s admonishment that members remain on defense and not break any laws, per the document, the Kansas Proud Boys may not have been in on this plan, either.

The file notes Knowles’ “placement and access is limited.”

It suggests that Knowles may not have even been privy to all of his own chapter’s plans that day, which do appear to conflict with the national group. It says he believes but isn’t sure that the Kansas Proud Boys’ leader acted of his own volition “and not at the direction of anyone at Proud Boys USA” when he ordered chapter members “to not start anything.”

The document also implies that the Kansas group itself wasn’t in the Proud Boys’ inner circle, as it states that they spent a significant amount of time the morning of the Capitol riot trying to find other Proud Boys.

“The group stayed a couple of hours waiting to meet up with others, but nobody showed up,” it states. “…The group then started wandering to find other Proud Boy members. The CHS got a hold of the Proud Boy Ozark members, and arranged to meet up with them on a street corner.”

In spite of these inconsistencies and inaccuracies, the Gateway Pundit’s report about Knowles is being accepted as the gospel by people eager to believe anyone was responsible for the Capitol riot other than the people charged. Social media is rife with claims that the file exonerates the Proud Boys and that it’s being suppressed.

Some are even calling for all the people charged in the riot to be released outright based on the file.

According to the file, the FBI warned Knowles that he could be among those charged.

“The CHS was admonished for entering the Capitol Building, and the handling agents explained that the FBI cannot offer any protections if the CHS committed a crime,” it states.

Knowles, however, does not appear to have been charged.

Update 7:52am CT, July 18: This post has been updated to reflect that the time stamps in the text messages about barriers being breached are noon Central time.