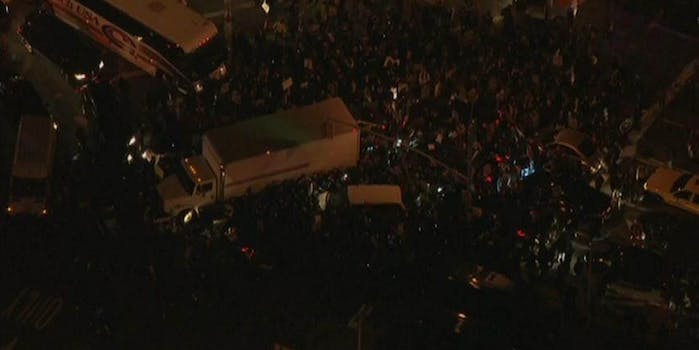 The protests have been largely peaceful.

For a second night in a row, protests around the country have emerged in the wake of a grand jury declining to indict Ferguson, Mo. police officer Darren Wilson for the killing of Michael Brown.

In New York City, the nation’s largest city, protests have been ongoing for hours. Monday night, they shut down the city’s biggest bridges. Tuesday they’ve shut down some of New York’s biggest roadways and many demonstrators are headed to the bridges once again.

NOW: Protesters have blocked the entrance to the Lincoln Tunnel in New York City. – @NBCNightlyNews pic.twitter.com/xPt6FCLgO2

Thousands of people have just shut down the FDR drive in New York City for #Ferguson pic.twitter.com/wmor8IqawY

Taking over manhattan bridge in solidarity with #Ferguson pic.twitter.com/UPuJQerUJw

We now take the Manhattan Bridge in the name of #JusticeForMikeBrown pic.twitter.com/HdB9uQhK6Z

The protests have hit many of the country’s biggest metropolitan areas and are active in dozens of states.

Small but vocal march in #NewOrleans tonight for #Ferguson pic.twitter.com/aH2eCBUwih

Scene outside of my job right now. Chants of "Hands up, don't shoot" people of every color. I am FILLED. #cleveland pic.twitter.com/S7SX4Kl5ea

Much less peaceful: A car plowed through protesters in Minneapolis, leaving at least one woman in the hospital.