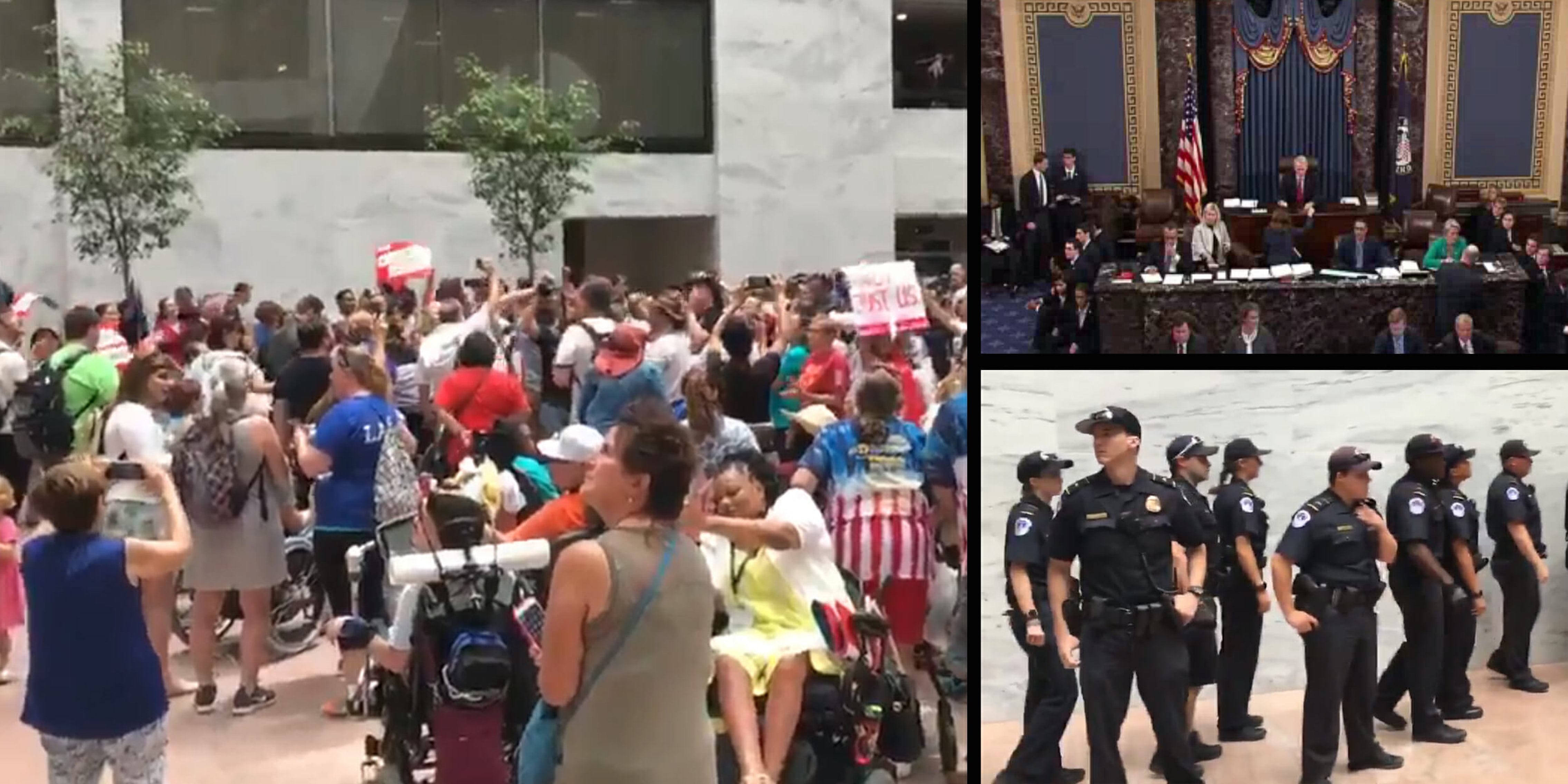 Photos via @JStein_Vox/Twitter Photo via CSPAN

The protesters were reportedly handcuffed afterwards.

Protesters chanted at lawmakers on Tuesday shortly before they voted on a procedural motion to begin repealing the Affordable Care Act.

As Senate Majority Leader Mitch McConnell (R-Ky.) asked for a vote to proceed on the controversial healthcare related procedure, protesters loudly chanted “kill the bill, don’t kill us!” and “shame!” at the lawmakers, prompting the sergeant at arms to “restore order in the chamber.”

The vote was to begin debate on repealing, and possibly replacing, the nation’s current healthcare law. The Affordable Care Act has seen a recent surge in popularity as efforts to remove it by Republicans have intensified.

Protesters chant "kill the bill" and "shame" as senators begin a key procedural vote on the Obamacare repeal bill pic.twitter.com/f7Q9M3uexy

As the Senate narrowly voted to pass the motion, the healthcare protesters were handcuffed and removed from the hallway outside of the Senate chamber, according to reporters on the scene. The same reporters, however, were allegedly told to not take photos of the protesters and delete any videos they had taken.

Reporters blocked from Senate halls where protesters being arrested, shouting, "Kill the bill!" Being told, "no photos. Delete your photos."

Sergeant at Arms just backed reporters off, called it a 'crime scene.' Protesters have been escorted away.

Capitol Police made me delete the video I recorded. https://t.co/NQH2fLFYiO

About 10 protesters were handcuffed & removed from hallway outside Senate chamber. We were told it's a "crime scene" & not to take photos

Anyone, including reporters, has the right to take photographs or video in a public area as long as they are not interfering with police work. The American Civil Liberties Union (ACLU) quickly responded to reports of police forcing reporters to delete their photos and videos: “Police may not delete photographs without a warrant, period.”

Police may not delete photographs without a warrant, period.

If you think your rights were violated by Capitol Police, contact @ACLU_DC. https://t.co/6fdvuIoOgB

As those protests were going on in the Senate gallery, “several hundred” protesters made their voices heard at the nearby Hart Senate Office Building.

ADAPT activists being taken out one by one by Capitol Police, being greeted by huge applause as they go pic.twitter.com/EJddxpIi2Q

Capitol police arrested more than two dozen protesters involved in the action in the Senate gallery, according to Think Progress.

While hundreds of Americans were protesting the bill, President Donald Trump congratulated the Senators for narrowly passing the vote after Vice President Mike Pence broke the 50-50 tie.

.@SenJohnMcCain-Thank you for coming to D.C. for such a vital vote. Congrats to all Rep. We can now deliver grt healthcare to all Americans!

Activists and Democrats are urging voters to call the Senate switchboard at (202) 224-3121 and contact their senators to voice opposition to the legislation—whatever it may ultimately be.