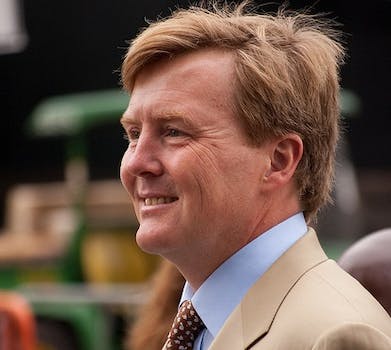 With lyrics like “The W of William/Three fingers in the air/Come on, come on," it sounds more like a '90s boy band B-side than an anthem fit for a king.

It’s inevitable: As soon as a piece of pop music is endorsed by a politician, it instantly becomes embarrassing and uncool. It’s like the ultimate version of your dad becoming a Belieber. U.K. Prime Minister David Cameron admitting that he listens to Radiohead and the Smiths? Newt Gingrich playing “Eye of the Tiger” at a rally? Please, just stop.

The future king of the Netherlands has just gone one step further, commissioning a folk-rap fusion song for his coronation at the end of the month. At 45, Prince Willem-Alexander is the perfect age to take on the role of embarrassing dad—for an entire country.

The song, “Het Koningslied” (or, imaginatively enough, “King’s Song”), begins as a standard-fare, ’90s-influenced folk-pop ballad, but then it breaks into a Dutch hip-hop section in the middle—accompanied by a classical orchestra. To foreigners, it sounds like a mediocre Eurovision entry, but it’s a lot worse when you can actually understand Dutch.

With lyrics like “The W of William/Three fingers in the air/Come on, come on” and “Through wind and rain I’ll stand beside you. … I’ll keep you safe as long as I live,” it seems more like a ’90s boy band B-side than an anthem fit for a king. Since the song was released on Friday, it’s been met with widespread derision—to the extent that more than 39,000 people have signed a petition to have it removed from the coronation ceremony.

Titled “In protest at this imbecilic ‘King’s Song,’ I hereby abdicate as a Dutch subject,” the petition is full of comments from Dutch citizens criticizing the song for its bad lyrics and adulatory attitude toward the bland Prince Willem. A typical comment: “Het Koningslied” “spontaneously turns you into a republican, if you weren’t one already.”

In a surprisingly democratic move for a song all about the joys of monarchy, “Het Koningslied” has already been withdrawn from the coronation schedule. After two days of receiving abusive  messages about the quality of his songwriting, Dutch-British producer John Ewbank was forced to admit via Facebook that the song was not doing Prince Willem any favours.

He signs off the message with a few recommendations for alternative songs to perform at the coronation, including the more Internet-friendly “You’re the King,” recorded on YouTube by a pair of students from the University of Utrecht.

Featuring footage of Dutch street parties and the two students singing in a room full of empty wine bottles, “You’re the King” is already significantly less embarrassing than the heavily overproduced “Het Koningslied.” And with almost half a million YouTube hits (not to mention a significant lack of hate comments), it may end up being more more popular than the original choice.