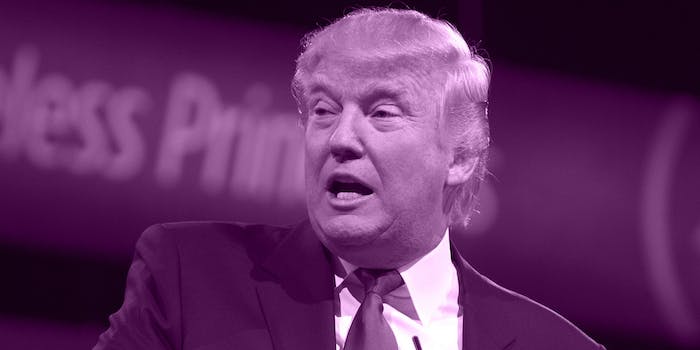 Prince once wrote a sexy song about ‘black’ Donald Trump

As the world mourns the loss of visionary musician Prince, who died at his Minnesota home on Thursday at age 57, more people are discovering the artist’s catalog of once-obscure deep cuts.

And it turns out that one of those tracks is yuuuuge.

Prince wrote the song, “Donald Trump (Black Version),” for the funk group the Time—better known as Morris Day and the Time, for you Jay and Silent Bob fans out there. The lyrics are not at all political—the song was released in 1990—but they do help reveal how Trump has long fit into American culture.

Here are the lyrics:

Honey, baby, you truly know it. (You truly know it.)
You look good. Tryin’ your best to show it.
If I were you, I would. True love and affection.
These are nice (so nice), but when a money man walks in the room, girl,
You look more than twice.
You look once (you look twice).
Can I rap to you, sugar, tonight?

Even better, here’s the song itself:

After Prince’s death, which felt like a punch to the chest to his many fans, Trump tweeted out that the singer was “an amazing talent and wonderful guy.” According to the candidate, the two met “on numerous occasions.”

I met Prince on numerous occasions. He was an amazing talent and wonderful guy. He will be greatly missed!

Prince’s passing has prompted an outpouring of remembrance and tributes over the past 24 hours. Google reported on Friday that searches for the singer’s name accounted for as much as 29 percent of all U.S. searches as news of his passing spread.