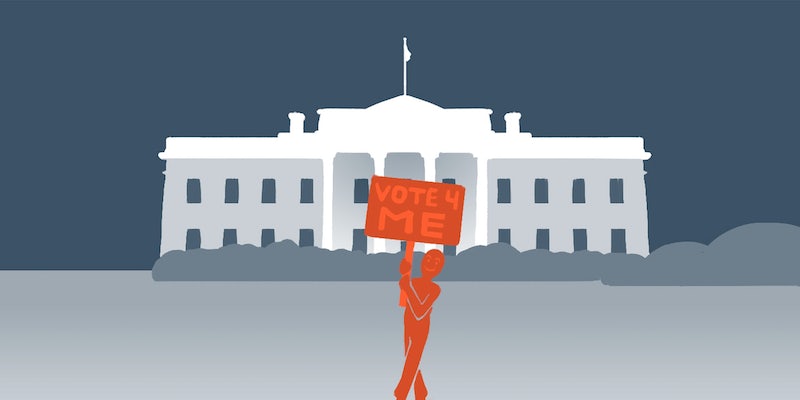 Who needs Republicans or Democrats?

The 2016 presidential election is still over a year away, but the field has already gotten crowded.

Most media coverage of the race includes six Democrats and 14 Republicans (or fewer), but the full list of declared presidential candidates has soared, thanks to a late August surge, to 1,049. There are a few jokes in there (or who knows? Maybe Butt Stuff is real), but a number of relatively unknown candidates are making serious runs to upend America’s established political order by beating the two party system.

Question is, does any independent candidate stand a chance?

The answer is, of course, no, and part of the reason is that it’s nearly impossible to spot serious coverage of non-major candidates. Even big-time Democrats complain they aren’t getting a serious shot by the media against Hillary Clinton, and third party candidates have a bigger mountain to climb.

We put together a comprehensive list of all the independent presidential candidates who have filed the legally-required federal election forms and maintained an active online presence into this month.

These are the people you’ve never heard of that are trying to win your vote in 2016.

Stein is running for the second time for the Green Party, one of the most successful and controversial third parties in recent American history. Environmentalism is at the core of Stein’s platform, but she also wants a $15 minimum wage, universal health care, more peaceful foreign policy, and a goal of the “end [of] police brutality, mass incarceration and institutional racism within our justice system.” Stein received nearly 500,000 votes in 2012.

Eternal life—what’s not to like? As you can tell by his party’s name and Istvan’s platform, he’s is one of the most unique candidates of 2016. By expressly avoiding talking about issues like Social Security and taxes, Istvan focuses on supporting scientists and technologists in a quest to solve human aging and, ultimately, ending the problem of death. Although actually winning the White House is barely even a goal for Istvan, he’s already succeeded in gaining a large following and consistent mainstream media attention that may edge out any other candidate on this list.

Only just clearing the constitutional age requirement, Gladstone is a 35-year-old computer science professional who focuses on issues like privacy protections, intellectual property reform, campaign finance reform, and ending “overboard” mass NSA surveillance. Gladstone has written extensively on a wide array of issues but has relatively little exposure and support so far, even compared to other independent candidates.

Whitaker is a neo-Nazi praised by prominent white supremacists as “one of the very short list of guys who has actually gotten things done.” He’s a self-proclaimed right winger running first and foremost on the issue of “white genocide.” Whitaker is a prolific blogger, known mostly for “The Mantra,” which has become a clarion call for the white nationalist movement. The  American Freedom Party was established during the recent recession and gained 2,703 votes in the 2012 election.

A former Democrat, Sponheim has run for president in every election since 2008, when he deemed President Barack Obama “dishonest,” and has been similarly critical of Hillary Clinton in her latest campaign. Sponheim’s centerpiece issues include sustainability, a national expansion of public transportation, and more public housing. He’s easy to get to know, at least: Sponheim hosts a daily livestreamed video and chat show that he posts to YouTube.

A minister from Mississippi who lives in Texas, Copeland is running a religious campaign that include a God platform, a family platform, and a country platform. He vows to eliminate abortion, gay marriage, vaccine requirements, and the income tax. He wants to expand gun rights and green energy. He also aims to militarize all of America’s borders, deport all illegal immigrants, and go to war with the religion Islam. Like many third party candidates, Copeland has never held office, but views that as a major strength.

Tittle is a two-time presidential candidate from Virginia who previously ran on a small Republican ticket. Compared to some of her independent rivals, Tittle has been a persistent campaigner who attracted local television attention for her campaign announcement. She’s running on a platform of “cutting the fat off the pig called government,” ending the Affordable Care Act, and ending career politics. In 2012, she received nearly 2,000 votes.

Scroggie is riding across America in a winnebago to promote his candidacy, a trip he’s capturing on a YouTube channel that gets around ten views per video but nevertheless consistently updates from new locales. Scroggie is running to raise taxes on the richest Americans, ban GMO foods, legalize hemp, and reform the campaign system in the U.S.

Kahn is running her own cross country campaign trip as she promotes a “7 track strategy,” which involves shrinking and reforming government, providing greater transparency to the public, and reducing violence in America and around the world. Kahn had written extensively on her positions, including thousands of words on criminal justice reform.

A retired Marine, Hoinoski is running on the premise that God is pushing him “rescue and help America!” He wants to end gay marriage and abortion, declare English the country’s national language, secure its border, audit the Federal Reserve, and use marijuana as a source of cheap and environmentally friendly energy.

A New Yorker with Syrian ancestry, Faas is public school teacher focused on reform of immigration, education, and foreign policy. She’s built up a modest social media following on the premise of ending the “gridlock” of the last eight years that she credits directly to the two-party system.

Smith sports one of the snappier campaign slogans among the small independent candidates: “Why run a 21st century economy on a 19th century operating system?” His platform is centered around eliminating income taxes, balancing the budget, paying off the national debt, and eliminating interest in banking. Smith, who describes himself as a “serial entrepreneur” with a “Wall Street background,” predicts an imminent worldwide recession starting on Sept. 13.

Sartin is an Iraq War veteran focused on strengthening the Second Amendment, firing the Veterans Affairs administration, and strengthening border security. Sartin believes that the top two issues “plaguing” America are economic woes and racial tensions. He’s against the Iran nuclear deal and favors certain criminal justice reforms as a means of improving relations between police and the public.