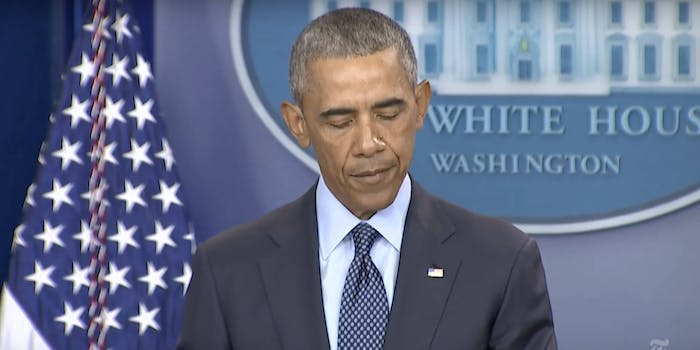 'We stand with the people of Orlando, who have endured a terrible attack on their city.'

On Sunday afternoon, President Obama responded to the mass shooting at the Pulse nightclub in Orlando, Florida that killed 50 people and wounded 53 more, making it the deadliest massacre in American history.

Speaking to assembled media from the White House press briefing room, Obama touched on the killings and their supposed motivations. The president began by describing the incident as a “brutal murder and “horrific massacre,” offered his prayers to the families of the victims, and described it not just as an “act of terror,” but also an “act of hate:”

“Although it’s still early in the investigation, we know enough to say that this was an act of terror, and an act of hate. And as Americans we are united in grief, in outrage, and in resolve to defend our people.”

Obama confirmed that he’d been briefed by FBI director James Comey, and pledged that the “full resources of the federal government” would be made available. The FBI is currently investigating the shooting as an act of terrorism. The suspected shooter, identified by authorities as Omar Mateen, reportedly called a 911 emergency line to pledge allegiance to ISIS leader Abu Bakr al-Baghdadi during the shooting, and also reportedly referenced the Tsarnaev brothers who executed the 2013 Boston marathon bombing.

Obama also addressed the shooting through the prism of gun control, owing to the fact that he’s had to do this so many times before. He’d previously called the day of the Sandy Hook Elementary School shooting in Newtown, Connecticut the single worst day of his presidency.

He went on to thank first responders and members of law enforcement, remarking that they “their courage and professionalism saved lives, and kept the carnage from being even worse,” before commenting on the impact the massacre will have on the LGBT community.

Obama then moved on to analyzing the tragedy through the lens of his longtime advocacy for gun control, which is especially weighty in light of congressional Republicans having thwarted a 2015 bill to prevent people on the terrorist watch list from buying firearms. According to NBC News’ Pete Williams, Mateen was himself on an FBI watch list about three years ago.

“Today marks the most deadly shooting in American history. The shooter was apparently armed with a handgun and a powerful assault rifle. This massacre is therefore a further reminder of how easy it is for someone to get their hands on a weapon that lets them shoot people in a school, or in a house of worship, or a movie theater, or in a nightclub. And we have to decide if that’s the kind of country we want to be. And to actively do nothing is a decision as well,” Obama said.

The assault rifle in question is reportedly the ubiquitous AR-15: the same rifle used in the infamous Sandy Hook and Aurora, Colorado theater shootings. Obama paid tribute to the victims who were slain at Pulse, asking Americans to give prayers for their families, “to bear the unbearable.”

According to the Associated Press, Obama also signed a proclamation on Sunday that all flags will be flown at half-mast, in remembrance of the victims, until Thursday afternoon.