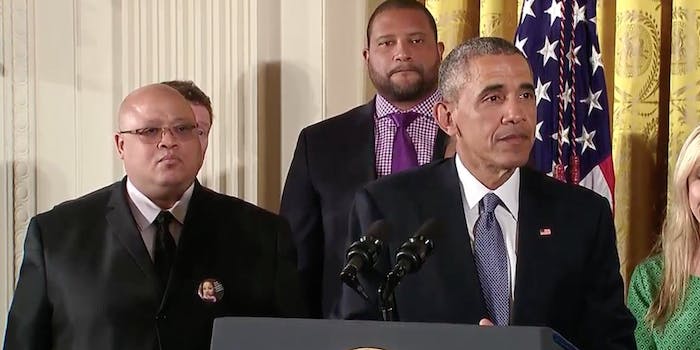 President Obama, with tears in his eyes, announces executive action on gun control

'Every time I think about those kids, it gets me mad.'

“The United States of America is not the only country on earth with violent or dangerous people. We are not inherently more prone to violence,” Obama said at a White House press conference. “But we are the only advanced country on earth that sees this kind of mass violence erupt with this kind of frequency. It doesn’t happen in other advanced countries. It’s not even close.”

“The gun lobby may be holding Congress hostage right now, but they cannot hold America hostage.”

The proposed orders, which were leaked by the White House on Monday, are expected to expand the Federal Bureau of Investigation with new employees, who will process background checks “24 hours a day, 7 days a week,” according to the White House. It will also expand the definition of those “engaged in the business” of selling firearms to include those conducting firearm transactions at gun shows or through the Internet.

The plan will not, however, expand background checks to cover every gun sale in the country. As the White House noted, “There is no specific threshold number of firearms purchased or sold that trigger the licensure requirement.”

“Every single year, more than 30,000 Americans have their lives cut short by guns,” Obama said. “Suicides, domestic violence, gang shootouts, accidents. Hundreds of thousands of Americans have lost brothers and sisters, or buried their own children. Many have had to learn to live with a disability, or learn to live without the love of their life.”

Under the president’s plan, gun dealers will also be required to notify the Bureau of Alcohol, Tobacco, Firearms and Explosives (ATF) when their guns are lost or stolen.

In addition, President Obama has called on Congress to allocate $500 million to expand access to mental health care—funds, according to a White House fact sheet, that will increase “service capacity and the behavioral health workforce” and “protect the health of children and communities, prevent suicide, and promote mental health as a top priority.”

The president also plans to put resources behind research and development of gun safety technology to help prevent gun owners and their children from accidentally discharging a firearm.

“If we can set it up so you can’t unlock your phone unless you’ve got the right fingerprint, why can’t we do the same thing for our guns?” Obama said. “If a child can’t open a bottle of aspirin, we should make sure they can’t pull a trigger on a gun.”

In a rare display of raw emotion, Obama briefly broke into tears while discussing the 2012 massacre at Sandy Hook Elementary School in Newtown, Connecticut, where a gunman took the lives of 20 children and six adult staff members.

“Every time I think about those kids, it gets me mad.”

“Every time I think about those kids, it gets me mad,” Obama said. “And by the way, it happens on the streets of Chicago every day.”

Obama, who plans to hold a town-hall meeting in Virginia to discuss gun violence on Thursday, urged members of Congress and gun owners to support further reforms to help reduce gun violence and deaths and injuries caused by firearms in the U.S.

“In Dr. King’s words, we need to feel ‘the fierce urgency of now,’” Obama said. “Because people are dying. And the constant excuses for inaction no longer do—no longer suffice. That’s why we’re here today; not to debate the last mass shooting, but to try to do something to prevent the next one.”