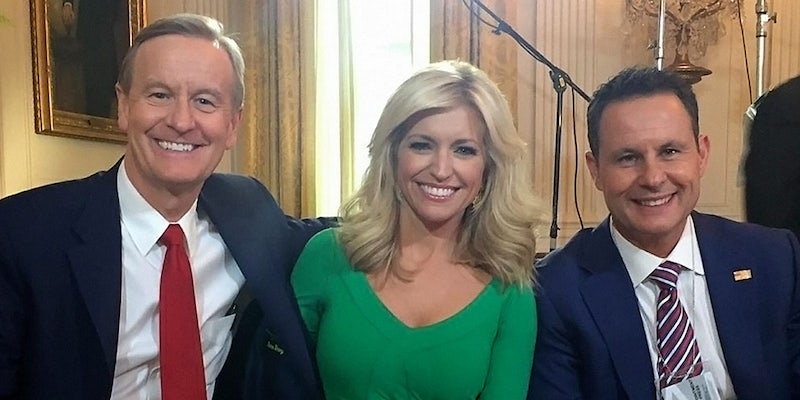 Does Trump not understand why ‘Fox & Friends’ is so influential?

This is a real head-scratcher.

News watchdog site Mediaite on Wednesday released its list of the 75 most influential people in media. Topping it are the hosts of Fox & Friends, Steve Doocy, Ainsley Earhardt, and Brian Kilmeade.

Was @foxandfriends just named the most influential show in news? You deserve it – three great people! The many Fake News Hate Shows should study your formula for success!

Fox & Friends was a non-entity at the beginning of 2017. In Mediaite’s list of 2016’s most influential people, the friends were nowhere to be seen. So what is this magical formula for success that the “Fake News Hate Shows” should study? What is this alchemy of media smarts and savvy these three found this year and rode all the way to the top?

There isn’t one! The reason they’re so influential is that they drive the national discourse because the president watches them all morning. While Trump routinely denies that he watches cable news, time after time the president has tweeted about things he’s seen on Fox & Friends.

From the treatment of Otto Warmbier:

Great interview on @foxandfriends with the parents of Otto Warmbier: 1994 – 2017. Otto was tortured beyond belief by North Korea.

To his own daughter’s interviews:

Ivanka Trump will be interviewed on @foxandfriends.

To his political opponents and conspiracy theories:

To promoting his national security adviser who pled guilty in a probe into Trump’s own campaign:

COMING UP @GenFlynn @newtgingrich on @foxandfriends

It is one of the primary sources of information for the president. And those are just the tweets he tags them in. Time and time again he sets the national conversation by watching a clip on the show. Back in July, he tweeted four consecutive Fox & Friends clips. It has a megaphone right to his ear.

He has to understand that cause and effect.