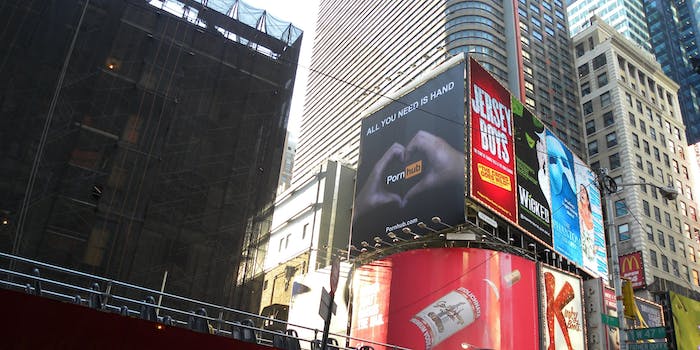 Unlike a majority of the site’s users, the unveiling of the site’s billboard was a long time coming. The effort began in March with an open call asking viewers for their most creative, clever, and SFW advertising ideas, as the brand planned its first national ad campaign. After reviewing some 3,000 submissions, it was Nuri Gulver’s “All you need is hand” tag that won and was unveiled in the flesh on Monday.

All You Need is Hand – Click this link to check out the choir singing in Times Square: http://t.co/kYzXZcHzsm pic.twitter.com/ETWD8bE5Vq

it’s unclear as to why the GM decided to voice her opinion that late in the game, so to speak—might have been the media attention, or she just had her own opinion of adult entertainment advertising that didn’t sit well.

Attempts to find another suitable space for the billboard in Times Square ultimately caved in and the company who owns the billboard space, City Outdoor, has reassured the site they will be recieving their $100,000 back in full.