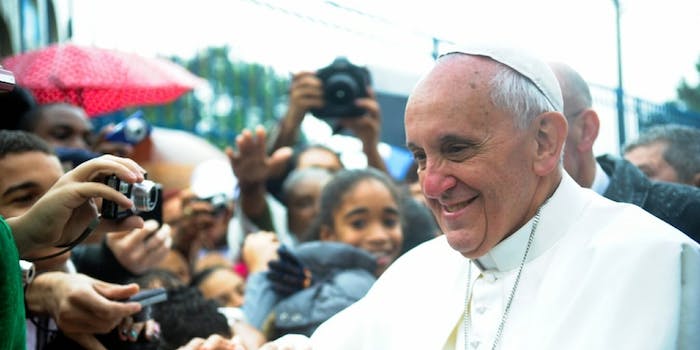 'When it comes to the care of our common home, we are living at a critical moment of history. '

“It seems clear to me…that climate change is a problem [that] no longer can be left to a future generation. When it comes to the care of our common home, we are living at a critical moment of history,” said the pontiff, who is in the United States as part of a tour that also involves speaking before Congress on Thursday.

“Such change demands on our part a serious and responsible recognition, not only of the kind of world we may be leaving to our children,” Francis continued, “but also to the millions of people living under a system which has overlooked them. Our common home has been part of this group of the excluded, which cries out to heaven and which today powerfully strikes our homes, our cities and our societies.

He continued: “To use a telling phrase of the Reverend Martin Luther King, we can say that we have defaulted on a promissory note and now is time to honor it.”

Francis’s oration draw sustained applause from a crowd of about 11,000 people who had assembled to hear his remarks. When President Barack Obama spoke during the same event, he echoed Francis’s sentiment on a politically contentious issue.

“When it comes to the care of our common home, we are living at a critical moment of history.”

“Holy Father, you remind us that we have a sacred obligation to protect our planet, God’ magnificent gift to us,” Obama said. “We support your call to all world leaders to support the communities most vulnerable to a changing climate. To come together to preserve our precious world for future generations.”

Francis, who earned a technical degree in chemistry before joining the priesthood, has long advocated for governments and individuals to reduce carbon emissions as a way to curb climate change. This stance has angered some American conservatives, especially since the issues is reportedly what the Pope plans to focus on in his speech to lawmakers later this week.

One legislator, Rep. Paul Gosar (R-Ariz.) has pledged to boycott Francis’s speech on the grounds that the religious leader is wading into partisan politics.

“If the Pope stuck to standard Christian theology, I would be the first in line. If the Pope spoke out with moral authority against violent Islam, I would be there cheering him on. If the Pope urged the Western nations to rescue persecuted Christians in the Middle East, I would back him wholeheartedly,” wrote Gosar in a post on the conservative blog Townhall. “But when the Pope chooses to act and talk like a leftist politician, then he can expect to be treated like one.”

Gosar’s sentiment isn’t unique among Americans. A recent Bloomberg poll found that, while 64 percent of Americans view the Pope favorably, only one-third support his activism on climate change. Other issues on which the Catholic Church’s leader has taken a stance—such as “authorizing priests to forgive women who have had abortions” and “refusing to judge a gay person who searches for the Lord in good will”—poll considerably better than his message regarding the environment.

Pope Francis’s full remarks from the White House can be found here.