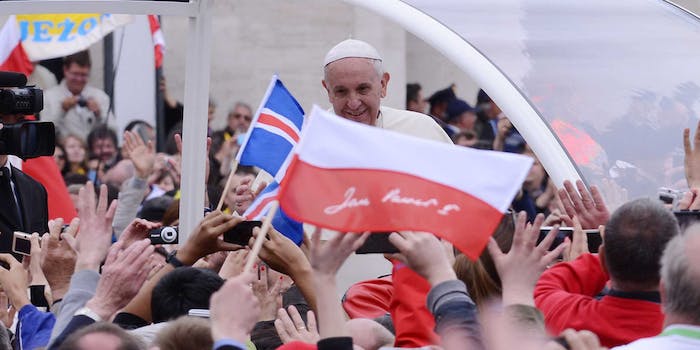 The Pope knows not to feed the trolls.

Pope Francis may be a man of the people, but not so much that he wants to join Facebook. The papal social-media presence, at least for now, will remain a Twitter-based one.

Archbishop Claudio Maria Celli, who is in charge of the Catholic Church’s media strategy, said that the decision was made due to concerns regarding abusive comments. This comes from a Quartz article reporting on a speech Celli gave at a lunch in New York hosted by DeSales Media that somehow fails to include any direct quotes. The Vatican press office did not immediately respond to a request for comment.

So the Pope doesn’t want to join Facebook—can you blame him? Facebook is, after all, full of trolls.

Facebook’s director of product just yesterday went on a rant about the state of the media—claiming that nobody other than Vice is doing hard reporting anymore (a claim with respect to which one can only laugh), as well as how everything is fluff and terrible and bad.

Of course, what Hudack was really talking about is the state of the content that gets shared on Facebook. The site claims that it has been tweaking its News Feed algorithm to better drive traffic to original content, to the highest-quality journalism and entertainment. Presumably those tweaks would also mean that the Pope’s content would appear high in the News Feed too. Of course, that would also bring even more Facebook trolls to the comments. Can you see the Pope’s dilemma now?