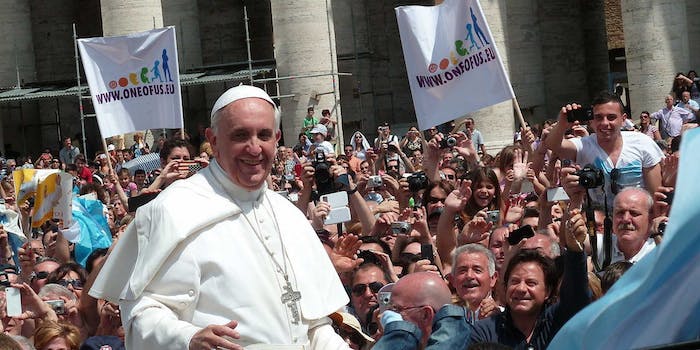 Pope Francis on Thursday took a loud and unequivocal stand on the threat of climate change, releasing a long-awaited papal encyclical that called for immediate action to stop the global environmental degradation caused by human civilization.

The 184-page encyclical by the pope, who was a scientist in Argentina before serving in several positions in the Catholic Church, highlights the effects of climate change on the world’s poorest people, who stand to lose the most from changes in the environment.

“The Earth, our home, is beginning to look more and more like an immense pile of filth,” Pope Francis wrote. “In many parts of the planet, the elderly lament that once beautiful landscapes are now covered with rubbish. Industrial waste and chemical products utilized in cities and agricultural areas can lead to bio-accumulation in the organisms of the local population, even when levels of toxins in those places are low. Frequently no measures are taken until after people’s health has been irreversibly affected.”

The Pope called the climate “a common good, belonging to all and meant for all,” and he asserted that “a very solid scientific consensus” shows that climate change is real, caused by humans, and threatening the future.

“Humanity is called to recognise the need for changes of lifestyle, production and consumption, in order to combat this warming or at least the human causes which produce or aggravate it,” he wrote.

The papal encyclical puts Pope Francis in line with the overwhelming majority of climate scientists, who have agreed for years that humans are causing unprecedented global warming.

The “ecological crisis” requires action from the world’s leaders, the pontiff said. The failure to do so is an abdication of our “sense of responsibility for our fellow men and women upon which all civil society is founded.”