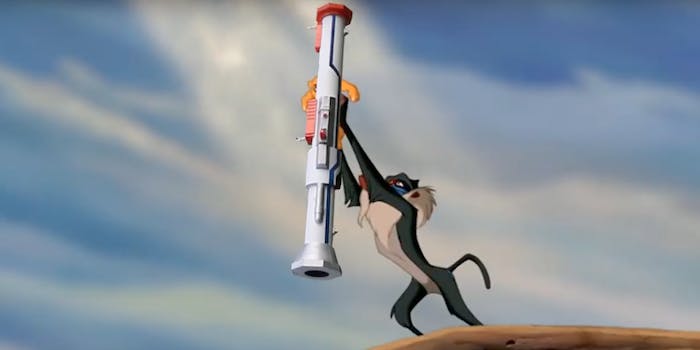 Your NERF gun is cute, but check out this bazooka

This pool noodle bazooka will destroy you.

NERF guns were a staple of my childhood, and in more recent years, the occasional office battle. Since I first started shooting colorful foam darts across the living room, however, NERF guns have evolved significantly (and absurdly). None match the power of the pool noodle bazooka, though.

Ryan and David, a YouTube duo who cleverly go by the moniker R&D, developed a truly impressive NERF-style shooter. Instead of shooting small darts, though, the four-foot-long bazooka blasts out pool noodles.

As for the ammo, the duo crafted pool noodles into giant NERF-style darts for the weapon’s 2.5-inch diameter barrel. The orange cap at the end is made of PVC. Clearly, this is not the type of ammo that is going to painlessly bounce against your tender flesh before falling to the ground—whatever this pool noodle dart strikes, it’s going to hit hard.

Testing out the contraption with a foam head as a target, both the pool noodle and the target were pretty much destroyed. The team tried its hand at a watermelon next, but you’ll want to watch the video to see how that went.

In the past, we’ve seen NERF darts go faster than the speed of sound and be used as a truly annoying way to bother a parent each day. This pool noodle bazooka is certainly one of the most dangerous, most powerful, and perhaps most creative incarnations of the treasured toy weapon, however. This is definitely something you shouldn’t try at home.

If this creation has left you wanting more though, Ryan & David have plenty of other NERF gun hacks (and other creations) over on their YouTube channel.