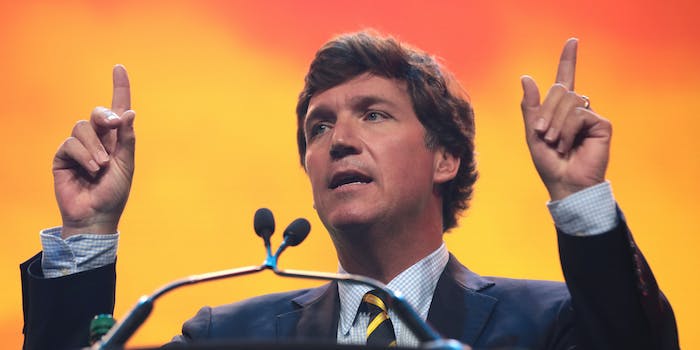 Everyone has a theory about Tucker Carlson and the NSA

Did the NSA spy on Tucker Carlson? Here’s what we actually know

New details unveiled last week regarding the controversy over whether the NSA spied on Tucker Carlson were seen by many as vindication for the Fox News host. But is that actually the case?

Axios reported that Carlson discovered that the government had become aware of his attempts to secure an interview with Russian President Vladimir Putin. This led him to make the sensational claim that the NSA had not only obtained his emails but leaked them to reporters in an effort to have his show cancelled.

Carlson, who Axios said had been communicating with “U.S.-based Kremlin intermediaries,” confirmed the reporting that evening on his talk show by stating that he had, in fact, been attempting to interview Putin.

Prior to the Axios report, the NSA denied that Carlson had been the subject of targeted surveillance in a rare public statement.

“Tucker Carlson has never been an intelligence target of the Agency and the NSA has never had any plans to try to take his program off the air,” the agency said.

The Axios report was touted by many of Carlson’s supporters online as proof that all of his allegations had been true. Jack Posobiec, a popular far-right conspiracy theorist, sent out numerous tweets praising the Fox News host.

“The NSA lied and Tucker was telling the truth,” he tweeted. “Who could have predicted this.”

But there’s just one problem.

The Axios report only states that the government became aware of Carlson’s attempts to interview Putin. It does not confirm anything regarding the NSA or intercepted emails.

Carlson’s supporters went on to accuse the Axios reporter behind the story, Jonathan Swan, of being the journalist who the host claimed had received his emails from the NSA. But Swan noted on Twitter that he had never received any emails, let alone evidence that Carlson had been surveilled by the NSA.

“If I had specific info on Tucker’s communication I would publish it. If I had info on an intel report/unmasking I would publish it. I don’t,” Swan said. “I published everything I could confirm so far. The piece lays out different scenarios & raises questions we are still chasing.”

Traveling with skincare and beauty products can be such a hassle. From protecting their fragile packaging to making sure not to leave any beloved products behind, there’s a lot for you to remember. Luckily, a wise team of makeup and adventure gurus assembled the travel beauty kit of your dreams.

With a nod to ’00s school supplies, Alleyoop’s travel beauty products are determined to change your life (but not your vacation plans).

There are numerous scenarios that could explain the situation.

The least likely, as noted by Axios, is that the NSA illegally targeted Carlson and obtained his emails.

A more likely scenario is that the emails of the Kremlin intermediaries that Carlson was speaking with were obtained by the NSA.

Opponents of Carlson argued on Twitter that the NSA has every right to monitor such emails. But legally, any intercepted foreign communication that includes an American citizen is supposed to be “minimized,” meaning any identifying information about Carlson should have been masked.

If Carlson was unmasked merely for attempting to interview a world leader, regardless of one’s thoughts on the Fox News host or the Russian president, that would present serious issues regarding press freedom.

Another scenario is that the Kremlin intermediaries leaked the conversations themselves in order to stir chaos in the U.S. It’s also possible that the NSA intercepted communications between two foreign surveillance targets who were discussing Carlson’s desire to interview Putin.

Carlson also claimed on his show on Wednesday that the NSA leaked his emails seeking a Putin interview to portray him as a “disloyal American” because “no decent American would interview Vladimir Putin, at least no reporter from Fox News.”

Carlson’s allegation, however, doesn’t appear to hold water. Fox News host Chris Wallace interviewed Putin in 2018 and even earned the network its first Emmy nomination as a result.

The NSA’s denial also doesn’t rule out the possibility that Carlson could have had his emails intercepted through incidental collection. But for now, all we know, according to Axios, is that the government was aware of Carlson’s interest in interviewing Putin.

The reality is that there are still too many unanswered questions and no solid evidence thus far to determine whether the NSA intercepted, unmasked, and leaked Carlson’s emails.

That, of course, could change in the coming weeks.