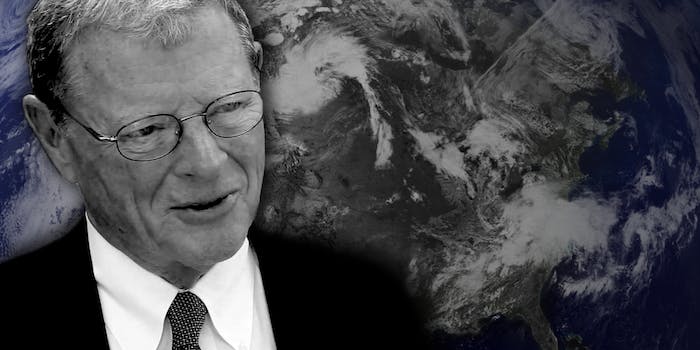 Want to know why polar ice caps are melting? It’s God, says so right there in the Bible.

Want to know why polar ice caps are melting? It’s God, says so right there in the Bible. Otherwise, what in the hot hot hell are you going to go and believe?

That’s the sentiment concluded upon by a whole slew of Republican congressmen and senators over the past few years, notes the YouTube channel Climate Desk, which concocted this 1:30 supercut called “Using the Bible to Resist Climate Action: A Supercut” over the weekend in an effort to point out to the general public just how crazily adhering to old scriptures some of these politicians can be.

Take Oklahoma Sen. James Inhofe, for example, who, in March 2012, referred to Genesis 8:22’s “There will be springtime and harvest, cold and heat, winter and summer, day and night” and followed it up with, “My point is, God’s still up there.”

Or Texas Sen. Joe Barton, who, in an April 2013 address, noted: “I would point out that, if you’re a believer in the Bible, one would have to say the Great Flood is an example of climate change. That certainly isn’t because mankind overly developed hydrocarbon energy.”

The video also features former presidential candidate Rick Santorum, who spoke at the Colorado School of Mines last February about Humanity’s dominion over the Earth and the way in which we’re supposed to use it “for our benefit, not for the Earth’s benefit.”

Politicians are crazy. You might want to be sitting down for this one.