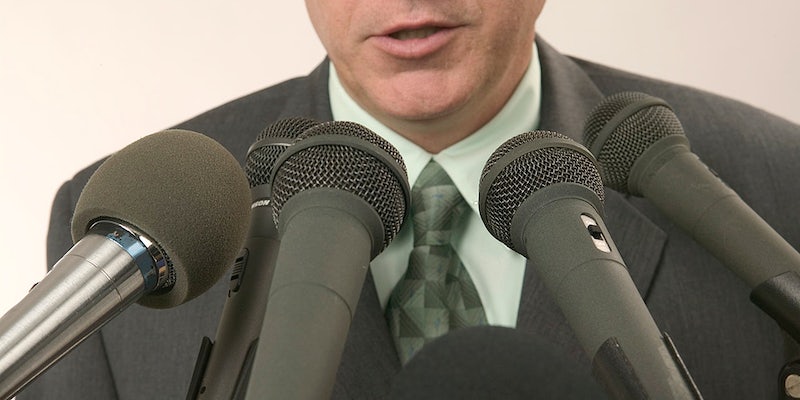 Debunking the worst political lies of 2014

There are others like them, but these ones are the worst.

Few countries on earth do lying quite like the United States.

The pageantry of our politics, the vast reach of our culture, and the view counts on our YouTube videos make universal celebrities of our liars—but that’s about it.

This year was no exception. While it’s true that mid-term elections like this November’s are the minor leagues compared to Presidential election cycles’ major league lying, both the cunning new and experienced old players get to flex their creative muscle as they prepare for the big show ahead.

Former Central Intelligence Agency director Michael Hayden is pretty sure the U.S. did not torture detainees after 9/11. So in the aftermath of the Senate’s report on CIA “enhanced interrogations,” he went all over television to not only defend the agency’s actions but to dispute that torture took place at all.

In order to have an honest debate about the merits and morals of American torture, we first must acknowledge it as what it is. By any legal definition, what took place was torture.

When Hayden says even forced feedings through the rectum without medical necessity is not torture—“It’s a medical procedure,” he said with a straight face—he’s being transparently disingenuous with the American people. No, scratch that, he’s lying.

Following World War II, the United States executed and jailed Japanese officers for waterboarding—torturing—Americans. But when we waterboard prisoners hundreds of times, does the law change?

At the Nuremberg Tribunals prosecuting Nazis, the United States rejected torture outright, as well as the idea that exceptional circumstances can justify it. But when we’re understandably shaken after 9/11, does the law change?

Here’s how the the United Nations’ Universal Declaration of Human Rights defines torture:

“Any act by which severe pain or suffering, whether physical or mental, is intentionally inflicted on a person for such purposes as obtaining from him or a third person information or a confession, punishing him for an act he or a third person has committed or is suspected of having committed, or intimidating or coercing him or a third person, or for any reason based on discrimination of any kind, when such pain or suffering is inflicted by or at the instigation of or with the consent or acquiescence of a public official or other person acting in an official capacity. It does not include pain or suffering arising only from, inherent in or incidental to lawful sanctions.”

For added insult to the lie, almost the entire regime of international laws that define and outlaw torture—from the Geneva Conventions to the Nuremberg Laws to domestic U.S. law—were written with the United States at the helm, as we sought to build a better world after a devastating world war.

On Fox News, the lies have been simpler but perhaps more effective.

In just a few short days of being released, the U.S. Senate’s report on CIA torture kicked up a rhetorical maelstrom around the world and from with in America. On Fox News, anchor Andrea Tantaros was in top form.

“The United States of America is awesome. We are awesome,” she said. “This Administration doesn’t want to have this discussion not to show us how awesome we are. They wants to have it to show us that we’re not awesome.”

This is a teeny re-phrasing of an age-old political lie: When you criticize us, you’re unpatriotic. When I criticize you, I’m patriotic.

The vast majority of the world’s scientists all agree: Man-made climate change is happening and threatens to harm us all. Many of the world’s most powerful politicians, on the other hand, aren’t so sure.

Some of the Republican party’s most prominent 2016 presidential hopefuls, however, regularly contradict the scientific community.

Sen. Marco Rubio (R-Fla.) believes that human activity is not “causing these dramatic changes to our climate,” he said. “And I do not believe that the laws that they propose we pass will do anything about it. Except it will destroy our economy.”

Climate-change denial is by now a classic political lie. What then makes it worth including in this year’s list? Every year that passes without concrete consensus and action puts us at greater risk, so this year’s lies could be even more costly than last year’s.

Today, 97.1 percent of all scientific papers agree that human beings have negatively impacted the atmosphere. So Rubio, who has said with all seriousness, “I’m not a scientist, man,” is baselessly disagreeing with a century of science.

The result is that only 14 percent of Republicans view global warming as a priority for action, and only 24 percent believe in man-made climate change at all. (For comparison, 42 percent of Democrats believe climate change is a major priority, and 67 percent believe humans have contributed to global warming.) That makes it extremely difficult for legislation to pass, which puts us at increasingly greater risk. The United States is the world’s biggest polluter per capita and the second worst overall, following China. However, our citizens express by far the most skepticism about whether or not that even matters.

That makes climate change denial one of the biggest lies of the year once again.

3) Encryption is only for criminals

The world, it is a-changin’.

The Obama administration oversees by far the most vast surveillance program in human history—a hypocritical position for a candidate that vocally campaigned on promises of transparency.

Arguments over transparency and privacy have come to a head in recent years since Edward Snowden exposed a large swath of America’s eavesdropping to the world. Now, some of the biggest companies on Earth are responding by beefing up their customers’ security with powerful encryption. It’s hardly perfect, but it’s a start.

Facebook is encrypting WhatsApp by default, Google is encrypting GMail, and Apple is encrypting its iPhone by default. These are some of the biggest headline grabbers from the past year in technology, but there have been many smaller moves boosting adoption of encryption around the globe. Many in law enforcement are not pleased.

“Apple will become the phone of choice for the pedophile,” John J. Escalante, chief of detectives for the Chicago police department said when he heard that the iPhone would be encrypted by default.

FBI director James Comey wants a new law effectively banning strong encryption by placing backdoors into consumer technology, even though the security industry widely agrees it’s unsafe. Earlier this year, Comey said Apple’s new encryption puts its users “beyond the law,” and has asserted that the privacy technology could put people in danger.

Despite what the headlines might imply, encryption is not at all new. It’s been around for decades. So what can the past tell us?

“Of the 3,576 major offenses for which warrants were granted for communications interception in 2013, exactly one involved kidnapping,” cryptographer Bruce Schneier wrote in response to Comey. “And, more importantly, there’s no evidence that encryption hampers criminal investigations in any serious way. In 2013, encryption foiled the police nine times, up from four in 2012—and the investigations proceeded in some other way.”

Not only that, but the FBI itself is often a big proponent of civilian encryption. A 2011 assistant director’s speech asserted that encrypting data protects innocent people from hacks. This year, under Comey’s rule, the FBI’s own website encouraged the use of encryption.

Priceless. The FBI's own website recommends enabling encryption on cell phones, as the FBI director condemns it. pic.twitter.com/AQNYVHk4D7

Comey’s push to ban strong encryption seems to have petered out for now, but it remains an important part of the future of the Internet. Encryption is how human beings will be able to protect their most private thoughts, communications, and information for the foreseeable future.

Banning encryption or making it so unsafe as to be useless is so fraught with enormous risk to the privacy of everyone who uses the Internet that it is one of the biggest lies of 2014.

Photo via audio-luci-store.it/Flickr (CC BY 2.0)