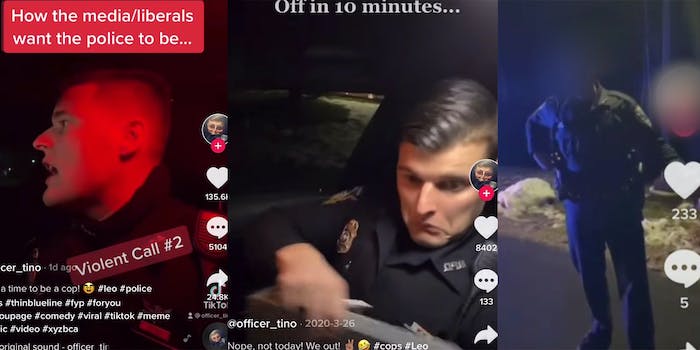 ‘Look like you are going to shoot people. Can you just not?’: Cop’s viral TikTok mocks police reform

After mocking police reform in a series of videos on TikTok, a police officer in Bedford, New Hampshire is on paid leave pending an investigation. In the videos, the officer filmed himself jokingly reacting to a mock call to police that someone was holding a gun near a crowd of people.

In the video, the officer faces the camera with the text, “How the media/liberals want the police to be…” as he pretends to deal with an active shooter alert.

“You look like you are going to go shoot those people. Can you just not? Oh it is pointed at me. I’m out,” the officer says.

The TikTok, which was uploaded by @officer_tino had over 135,600 likes and 5,104 comments according to a screen recording shared by CBS Boston before it was deleted from the platform.

“What a time to be a cop! #thinblueline,” the officer captioned the video.

In an interview, Bedford Chief of Police John Bryfonski discussed the officer’s actions on social media, saying it was a negative reflection of the department as a whole.

“It is deeply disturbing to me as a chief of police,” Bryfonski told CBS Boston. “Whether or not it occurred in the context of today’s scrutiny of law enforcement or it occurred five years ago, to me it makes no difference. It is still conduct that needs to be balanced against what the department defines as appropriate and professional.”

According to Bryfonski, the subject in the TikTok videos has been an officer on the Bedford police force for three years and removed the videos from his social media after one viewer reposted them to YouTube.

“The integrity and the trust and confidence in the Bedford Police Department clearly is shaken here,” Bryfonski continued.

The officer in the TikTok videos is now on paid administrative leave while another officer who may have been involved is still on active duty pending an ongoing investigation.

“There’s nothing new regarding the officer placed on leave. A second officer’s posts are being investigated, but he is not on leave at this time,” a police spokesperson for the Bedford Police Department told the Daily Dot.