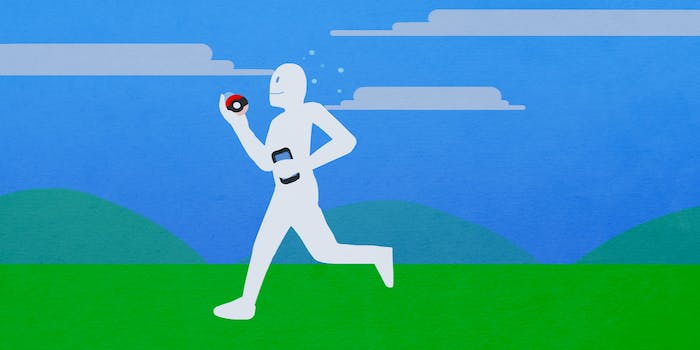 PokeFit is the fitness tracking app for Pokémon Go players

Pokémon Go is everyone’s favorite way to accidentally get exercise, but the only real way to keep track distance traveled is by the number of eggs hatched, right? A new supplementary app called PokeFit is aiming to turn the game about catching pocket monsters into a full blown fitness tracker.

PokeFit doesn’t change much about the Pokémon Go experience; all it does is place a simple dashboard overlay in the upper lefthand corner of the screen. But housed in that simple, translucent box is a wide breadth of new information about each and every hunt.

On the dashboard and immediately accessible at all times is a bit of information about the current session: duration, distance traveled, steps taken, and calories burned. It’s the typical, basic overview provided by a standard fitness tracker, but with a couple Pokéball tosses in between steps.

Beyond just providing the basics, PokeFit digs into some additional details about each of your journeys to the (virtual) gym. It stores each trip taken as an individual hunt so they can be revisited, and records a map of the path taken to accompany it, allowing any Pokémon trainer to quickly retrace their steps.

Pokémon Go doesn’t just get its users off their feet; the app is likewise gives the user’s device a workout. PokeFit has some insight into that as well, tracking the data consumption of the game and the drain on the battery it causes—though PokeFit shouldn’t contribute to that wear on the device.

“In our tests, we didn’t find any significant impact on battery or data usage from our app while it runs in the background. In fact, we designed it that way,” Dirk Bernhardt, the CEO of P3 Communications, explained.

If Pokémon Go burning more data than a user is calories, it might be time to take a break.

Pokémon Go gave users a bit of a scare when it first launched with its permissions that were overly generous and allowed considerable access into a user’s linked Google account. PokeFit users may worry their information could end up in the wrong hands when lending it to a third-party app.

According to Bernhardt, there is no cause for concern. PokeFit “only collect[s] data anonymously.” That information is used to “help mobile operators, manufacturers and regulatory authorities improve the global customer experience.”

According to the app’s terms and conditions, PokeFit doesn’t collect any data that could be used to identify an individual. It does gather “pseudonymous data,” such as the type of internet connection a user is on. It does note that ” measured velocity and location” would fall under the category of “pseudonymous data,” which seems as though it could be used to identify a person if paired with other information.

For players who want to keep hunting for Pokémon regardless the data or battery cost, PokeFit provides the tools to keep going. Specifically, it can override the game’s automatic screen timeout setting and keep the display on while trainers continue their hunt.

Bernhardt said the team has plenty of ideas that won’t just keep people playing, but moving as well. The team hopes to include a social feature in new iterations of the app, allowing players to compete with friend and family and earn rewards based on activity levels.