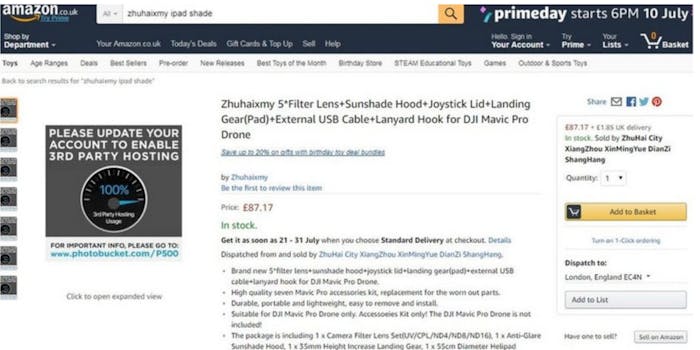 Users must pay $400 to have their images appear on third-party websites.

Denver-based Photobucket is facing backlash on social media for introducing a $400 fee to customers who want to embed photos on third-party sites like online marketplaces or forums. Many users were unaware of the charge, and were surprised to find their images had been replaced with error messages.

Long-time Photobucket customers have accused the company of extortion, and now claim it is holding their images for ransom.

you are a DISGUSTING company @photobucket this is 100% blackmail. I have years of blog content on your platform, now forcing to pay 400/year

@photobucket I understand you've resorted to extortion to "value Add" and supplement your income true/false?

Been a .@photobucket member for ten years, joined on 19th May 2007. Account now deleted due to their extortion and ransom wankery.

#photobucket destroys all my (and so may other) forum and blog images with 0 warning. Major POS company. #extortion

People are furious at Photobucket for not clearly explaining the changes to its more than 100 million customers. In June, the company posted a short blog post asking users to review updated terms and policies. Instead of writing a few sentences that would explicitly describe the fee and consequences for not paying it, Photobucket left it up to customers to dig into the lengthy documents.

Within the terms and agreements is a brief section outlining different account plans. It explains that Photobucket’s most popular paid plan (102GB for $100 a year) no longer allows third-party image hosting, and that customers who need photos hosted on their site will need to pay $400 a year for the top-tier option.

“One of the biggest issues, however, was that it came out of the blue,” marketing company Aqueous Digital wrote in a blog post. “No one knew about it. There were no announcements, no emails warning people that it was about to happen and more importantly, no explanation.”

⚠️ Thank you for all of the recent feedback and questions. We are trying our best to respond quickly and thank you for your patience :)

Some users have already turned to competitors to get their photos back online.

Well tomorrow I start transferring everything to Flickr. Hopefully I can get it all done before Photobucket does the same to me.

Hey @photobucket, don't you wonder how many people host dumps of your extortion scheme on @imgur? You know, where it's free. #idiots pic.twitter.com/wHs10JyPdQ

Correction: Etsy was not one of the sites affected by Photobucket’s new terms, as was indicated by a previous version of this story. According to Etsy, the company “serves images via internally hosted web servers and cloud based hosting, such as Amazon S3.”