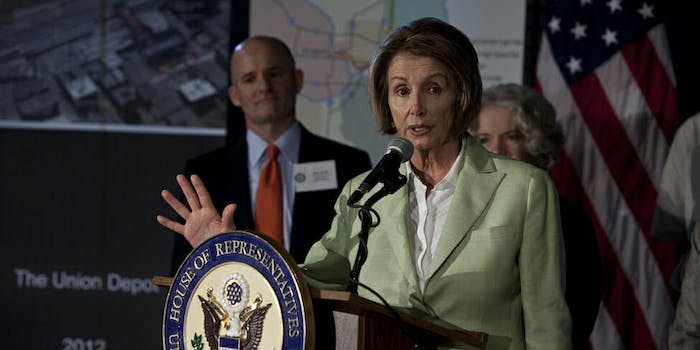 Pelosi brought up success stories of the DACA program.

Pelosi, speaking on the House floor, used her right as minority leader to speak for as long as she wanted to make her case.  The speech appeared to be in protest over Congress continuing not to address the Deferred Action for Childhood Arrivals (DACA) program that will expire next month.

The minority leader began speaking shortly after 10 a.m. ET on Wednesday. As of 4:30 p.m. ET she had not finished speaking.

"I have no intention of yielding back, Mr. Speaker. I have a lot more," House Minority Leader Pelosi says more than 5 hours into her speech on DACA and Dreamers pic.twitter.com/lqeoZHTDQK

Pelosi reportedly read statements from people who were brought into the country illegally as children—typically touching on how DACA has helped them and the accomplishments of dreamers.

The speech comes as Republicans and Democrats agreed to a spending bill that would avoid a government shutdown. The plan would add $400 billion to federal spending, but does not address immigration.

During the last government shutdown earlier this year, Democrats were able to get Senate Majority Leader Mitch McConnell (R-Ky.) to agree to debate immigration legislation in exchange for agreeing to a short-term spending bill.

By dismantling DACA last year, President Donald Trump‘s administration gave Congress until March 5 to come up with a solution.

On Tuesday, Trump said he would “love” to see another government shutdown if Congress did not agree to his immigration priorities–including building a wall on the country’s southern border.