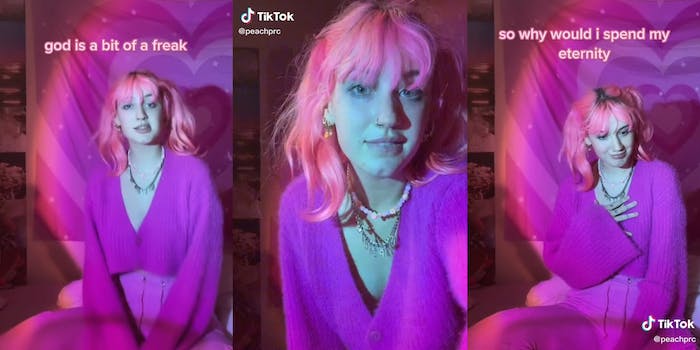 'God is a freak' is resonating on the app.

Every now and then, there’s a precise sound or song that becomes so viral among a specific niche on TikTok that it becomes intrinsically tied to that community. For depressed twenty-somethings in 2021, it was the entirety of Bo Burhnam’s Inside. For girls going through a body positivity journey, it might have been Maddie Zahm’s recently released Fat funny friend.

Now, for people who are working through deep-rooted trauma caused by growing up in communities that enforced strict religious norms, it’s Peach PRC’s God is a freak.

The Australian pop star had already become a TikTok sensation in 2021 with her debut single Josh. She first posted a snippet of her new tune with the caption “an anti worship song for my religious trauma girlies” in January. The chorus goes “God is a bit of a freak! Why’s he watching me getting railed on the couch or staying pure for a wedding? He’s got fucked up priorities.”

Peach PRC—aka Shaylee Curnow—published it without running the decision by her label, thinking they wouldn’t greenlight it because of the controversial lyrics.

It became swiftly popular: Within a few days, her first video had over 2.5 million views. The song has since been used as background in almost 10,000 videos. Aside from those who were just vibing on the catchy track, the music became particularly viral among a few niches of users who could relate particularly well to the lyrics: ex-Catholic, ex-Mormons, and the exvangelical community.

“I was raised Catholic and taught that gays go to hell. I was raised in purity culture and taught that my virginity was the best gift I could give to my future husband. I was told that if you lose your virginity, you are damaged goods,” user @raising2activists said in a TikTok set to the anthem. “I ended up marrying my first boyfriend at age 22. He was 12 years older than me. I was taught that marriage isn’t meant to make you happy, but holy. I was never taught about consent. I thought I had to submit to my husband because God created him to be the leader of my life and our family. When I let go of my belief in God and left the cult, I was finally able to accept myself! PRIDE.”

In a video that was later duetted by the Peach PRC herself, transgender advocate Liam Magan also discussed his experience with religious trauma. “My dad took me shopping for a purity ring on my 12th birthday. I was taught to save myself for marriage and that I would be like a chewed-up piece of gum if I didn’t,” he wrote.

“This led me to shame about my sexuality and kept me from speaking up when I was sexually abused as a teenager for fear of being seen as impure. I wore the ring for 10 years despite being sexually active. The guilt I felt as a result of purity culture caused me to only engage sexually when I was drunk enough to forget most of it. I finally took it off for good when I came out as transgender at age 22. I ended up selling it for $300 to pay for testosterone. Now I wear a wedding ring, but I’ll always think of this kid who was poisoned by the evangelical church and purity culture at such a young age,” he added.

God is a freak, which was later released as a full single in February, features lyrics such as: “What’s the fixation, on hating the way he creates? So why would I spend my eternity with God when he’s a freak?”

Although religious trauma is not included in the Diagnostic and Statistical Manual of Mental Disorders, it still impacts millions of people who have to coexist with deep feelings of guilt, shame, and condemnation linked to moral standards and expectations that were thrust upon them by deeply religious communities. These feelings are often intertwined with the deeply ingrained purity culture that exists within traditional communities such as evangelicals or Mormons. Within this set of beliefs, women and LGBTQ+ people may feel wrong, dirty, sinful, or evil for years for experiencing natural sexual needs.

Jubilee Alexander is one of the many users who felt drawn to Peach PRC’s song because of their past traumatic experiences. “Even though I left the church 15 years ago, I have to constantly re-renounce the shame and guilt it left. I know I’m not alone in embracing the freedom but also living with the trauma and scars it left on me,” they commented on a video set to God is a freak. “So if anyone needs to hear this, you are not dirty, you are not sinful, you are a beautiful miracle on the face of our world. And don’t let anyone in heaven or in earth tell you you’re not”

“I know the purity culture I was raised in caused me to self harm and attempt suicide as a teenager because I felt like the dirty slut they culture told me I was,” Alexander, who was raised in the Reformed Christian church and was religiously homeschooled, told the Daily Dot. “I think Peach’s song made me kind of turn a corner and realize that religious trauma isn’t just something that happened to me, but something I need to work through in therapy. A lot of the shame is still there, even though I live a pretty joyful life.”

Others also commented on the therapeutic effect of the song: “This song has helped me with queer religious trauma in an hour of listening more than a decade of therapy,” user Emily Stern shared in a video.

“My immediate reaction listening to the song was pure joy, almost euphoric, for someone finally putting words to something I’ve felt for years. As in, if there is a god, why in the world would he care who anyone is having sex with?” she said in an interview with the Daily Dot. “It helped me, because it validated so much anger I’ve had towards the homophobic side of evangelical Christianity. I just love how it called them out for being so weird for caring who is having sex with who.”

Peach herself rode the wave, sharing problematic religious experiences she had—like being told by youth group leaders that God watched everything they did—and eventually using it to come out as a lesbian herself.

“It was meant to be this silly song making fun of the ridiculous concept that it is to me,” the pop star told Billboard. “But to see so many people share these vulnerable stories, talk about their religious trauma and the way they’ve overcome—that has been so moving.”

The Daily Dot reached out to Peach PRC for comment, but an interview couldn’t be arranged.

The song could be seen as disrespectful by religious users, but it also sparked positive reactions from some progressive members of the clergy. Reverend Elizabeth Riley, whose inclusive approach to Christianism has gained her nearly 47,000 followers, used the song to share a message: “Friendly reminder from a priest: toxic purity culture has done so much harm, you body is not sinful, sexuality is good and holy, and you are free to let go of whatever shame the church taught you about sex.”

It’s a message that resonated almost as much as Peach PRC’s anthem.

“Hearing ‘sexuality is holy’ from a priest as a child would have changed my life,” reads one comment. “It’s so comforting to see it now. Thank you.”