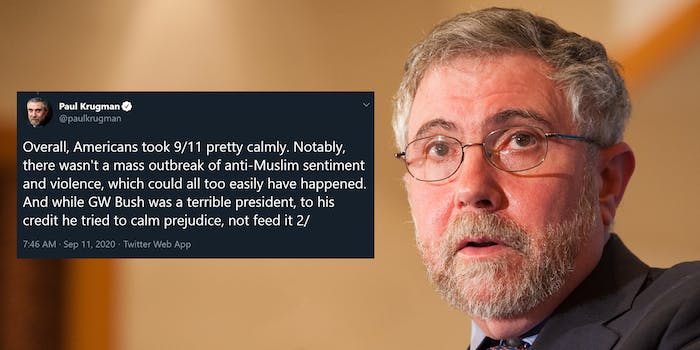 Every anniversary of 9/11 on Twitter, a site you are not required to post on by law, someone posts some absolutely terrible opinion, meme, or awful take on the terrorist attack.

This year’s winner? New York Times columnist and economist Paul Krugman, who dished this hot take at 7:46am ET, taking the crown before most of us had even logged on.

“Overall, Americans took 9/11 pretty calmly,” Krugman wrote. “Notably, there wasn’t a mass outbreak of anti-Muslim sentiment and violence, which could all too easily have happened. And while GW Bush was a terrible president, to his credit he tried to calm prejudice, not feed it.”

Krugman is saying is that in the immediate aftermath of the attack, Bush said “we are not at war with Islam,” a message designed to not let anti-Muslim sentiment foment in Americans’ hearts and minds. The only problem? The person delivering that message didn’t quite take it to heart (nor did Americans).

There were outbreaks of violence, with Americans foolishly attacking the wrong religion, and the Justice Department finding 800 incidents of post-9/11 hate crimes.

And then there is the litany of violence against Muslims perpetrated by the Bush administration post-9/11. Congress passed a carte blanche use of force bill that has since been used to attack almost every nation in the Middle East, the U.S. invaded Afghanistan, violence to this day persists even with troops still there, Bush created a torture program that disfigured innocent civilians, America invaded Iraq and killed more than a million people, and a recent study found the U.S. war on terror displaced 37 million people.

Whether you support the U.S. response or not, it perpetrated violence against Muslims that the world is still tallying. If you want to quibble and say it wasn’t “anti-Muslim” in literal philosophy sure, whatever, but that is going to get you dunked on. And dunk on Krugman many on Twitter did.

Don’t worry, Krugman waived all that away with a sentence: “And of course the Bush team used 9/11 to take us into an unrelated and disastrous war.”

“Of course.” He seems to be saying that‘s the less important takeaway.