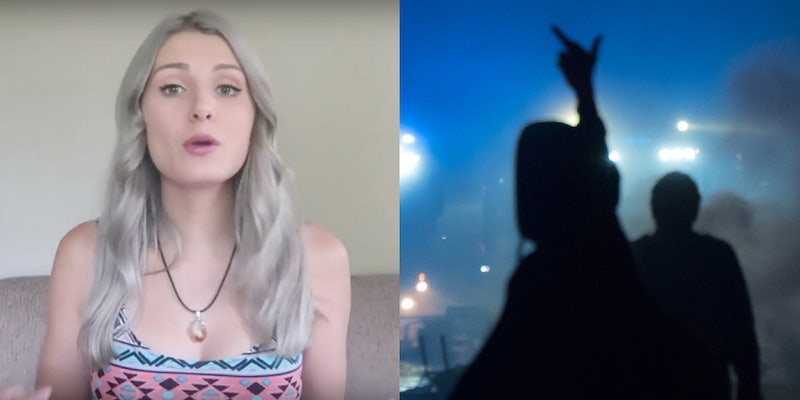 Money and politics are an explosive combination.

Avoiding politics online is nearly impossible. But what happens when your quest to remain neutral draws you deep into a firestorm between two of the most aggressive political factions of the Trump era?

Patreon markets itself as the prime way for independent creators to “come get paid,” as its website reads. Its users span the full gamut of disciplines, from video makers to educators to podcasters and everyone in between. If you like a certain writer, for example, Patreon enables you to kick her a few bucks for her efforts. For some successful Patreon users, the platform provides a substantial income.

The concept of Patreon is noncontroversial in the era of crowdfunding. But that all changes when you mix money and take-no-prisoners politics.

The company found itself in the middle of a hyperpartisan showdown between warring entities in the alt-right and the far left “anti-fascist” movement known as Antifa. However, it was Patreon’s efforts to remain outside the fray of politics that brought the fighting to a head.

The events that followed serve as either a warning to any company that attempts to navigate the murky, shark-filled waters of internet politics—or a model for how to use transparency as a weapon.

On July 20, without explanation, the company banned conservative provocateur Lauren Southern from the platform, cutting off valuable monthly donations from supporters and sparking a fierce backlash from mainly right-wing circles and alternative media outlets.

Hundreds of patrons and several creators abandoned the platform as a result, including scientist and podcaster Sam Harris, one of the most popular creators on the service.

One week later, on July 28, the company abruptly shut down the account of far-left news website It’s Going Down (IGD). The outlet, which has become loosely associated with the re-emergent Antifa movement since President Donald Trump’s inauguration, had published articles covering Southern’s activities amid its usual content, which is regularly re-posted anonymously from a range of anarchist and anti-capitalist groups.

“The purpose of using manifest observable behavior is to remove personal values and beliefs when the team is reviewing content. It’s a review method that’s based entirely on observable facts,” Jack Conte, Patreon’s CEO, said.

This is how I think about Patreon's content policy, Lauren Southern, Defend Europe, IGD, and more: https://t.co/23Bmip8x7A

Southern’s ban, Conte said, came through her involvement with right-wing youth organization Génération Identitaire’s Defend Europe project. Defend Europe was a crowdfunded mission to intercept boats filled with migrants journeying across the Mediterranean to Europe and to transport migrants back to their home countries in North Africa.

“We removed [Southern and Defend Europe’s] pages because they directly obstructed a search-and-rescue ship in the Mediterranean, and they made a variety of statements and outlined plans to obstruct similar rescue ships in the future,” Conte said, reasoning that this could endanger the lives.

Following the ban, Southern denied she was personally involved in the mission. In his response video above, Conte listed the “observable facts” that his evaluation team had cited. These included using some of Southern’s own footage, in which she can be heard directing the Defend Europe boat operator to block the NGO rescue ship, and quoted statements Southern made in which she appears to speak and identify as part of the Defend Europe team.

None of these details were apparent in Southern’s original response to Patreon banning her. Conte, in other words, decided to call her out.

Conte then broke the news that, hours earlier, Patreon had taken the same action against IGD, an organization at the opposite end of the political spectrum from Southern—one that has also been actively critical of her work and politics.

Again, Conte pointed to observable and available content as violations of the company’s content policy. The evidence against IGD consisted of two articles that were reposted on the leftist website, which unapologetically states its mission is the promotion of both “revolutionary theory and action.” One article featured an instance of doxxing—the publishing of an individual’s personally identifiable information—and another instructed readers on how to sabotage a railway line.

Likely anticipating accusations of cutting off IGD as a way to appear politically neutral, Conte said the website had been flagged for review before Patreon banned Southern.

“We don’t batch pages together and take down opposing pages at exactly the same time to proactively seem like we’re being fair, ” Conte said. He added: “When we removed Southern’s page, IGD’s page had already come to our attention from a number of inbound reports and was already in our queue.”

Conte’s attempts to pull Patreon out of the snake pit of politics failed. After IGD’s ban, some on the far left, who cheered at Southern’s banning, accused Patreon of pandering to and working with the alt-right.

“IGD was banned as an act of appeasement to the alt-right,” IGD’s editors asserted in a comprehensive post, which points to a sustained and coordinated call by alt-right media outlets and personalities to have its funding cut off. “Behind the gimmicks and wonky terms about ‘manifest observable behavior,’ the entirety of Conte’s video is an attempt to pacify the trolls.”

On the right, disgruntled Southern supporters had taken to calling out Patreon on social media and blogs for what they believed to be a politically biased judgment.

Lauren Southern's (@Lauren_Southern) Patreon account was deleted, but IGD's is still up despite how they promote violence against police. pic.twitter.com/DEXkzYR9HK

To Southern’s supporters, Patreon had stifled free speech in the name of the left; to IGD supporters, the company had sought to placate angry alt-right trolls in banning their outlet.

Yep @submedia is cancelling our @Patreon account in solidarity with @IGD_News My response to @Timcast & @jackconte https://t.co/Y0spaAZCXQ

Although motivated by transparency over its decisions and ethical boundaries, the company had become a villain to both the extreme left and right. In fact, parties on both sides made Patreon a political battleground for its attempts to remain politically neutral.

‘Lobbied’ from the left, spammed by the alt-right

Both Southern and IGD came to Patreon’s attention because of “a number of inbound reports,” according to Conte, which activists on both left and right utilized as a way of attacking one another. While left-wing activists ran a #DefundDefendEurope campaign targeting Southern, alt-right activists were pushing a #DefundAntifa campaign aimed at IGD.

The banning, it said, came “after several weeks of lobbying by Hope Not Hate, which contacted Patreon to raise concerns about far-right activists making money via the service.” Hope Not Hate also claimed that the “sustained and effective #DefundDefendEurope campaign” resulted in the shutdown of Defend Europe’s bank and PayPal accounts.

Southern—a 22-year-old Canadian who regularly covers or discusses issues like “the nightmare of mass immigration” and condemns liberal versions of feminism—seems an obvious target for her political opponents on the left. When Conte was asked on a recent episode of the Rubin Report about Hope Not Hate taking credit for Southern being kicked out, however, he explained that the only “lobbying” process was via the reporting system.

“We don’t actively police the community,” Conte said. “The reason that a page gets taken down is because we get reports through an official reporting system … If they sent in a report, then we evaluated that report.”

Hate Not Hope did not respond to the Daily Dot’s request to clarify whether it used this reporting process to bring Southern to Patreon’s attention.

Just as Hate Not Hope was gunning for Southern, however, an underground alt-right campaign to have IGD’s account shutdown began in earnest.

The anti-IGD effort appears to have started back in June, one month after the outlet joined the platform.

Everyday our Patreon is growing. Check out our campaign to see how you can get involved! https://t.co/LIYiyQShok pic.twitter.com/v5iE5nAU7l

Alt-right activists on social aggregator Voat, a Reddit alternative offering no moderation and unbridled free speech, were called upon to bombard Patreon in a coordinated mass reporting of the IGD profile page.

A mysterious Voat user, a87d7sasa97h9, laid out in detail the plan in Voat’s Antifa subverse.

“Explain that It’s Going Down is an Antifa website,” the instigating user wrote at the time. “Include evidence of Antifa’s violent crimes to convince Patreon that Antifa is a terrorist organization. If enough people report this page, Patreon may shut it down and cut off some of Antifa’s funding. Every bit helps.”

An email template that would-be participants could simply copy and submit to Patreon pits IGD content against specific creator obligations stipulated in the Patreon content policy. Their most substantial weapon against IGD was Fox News’ negative coverage of IGD, which it said “calls for violence against Trump supporters.”

“Fox News has exposed It’s Going Down,” a87d7sasa97h9 wrote in an update, “use this as your primary evidence when reporting the Patreon page.”

The account behind the effort, which was used exclusively to push other users to participate, has since fallen inactive. It’s impossible to tell who was behind the seemingly random string of letters and numbers, whose most impassioned and lengthy post is suitably on the topic of maintaining online anonymity and security.

As the narrative consolidated in the Voat post was parroted by alt-right media outlets, alt-right activists were hard at work stacking up complaints and reports against IGD with Patreon when Conte’s video went live on July 28.

On discovery of the campaign, the Daily Dot contacted Patreon to request data relating to how and when the company was made aware of the IGD content, but a spokesperson refused to share the information.

“The team at Patreon strongly believes in building a platform that prioritizes free speech and celebrates diverse viewpoints,” a spokesperson told the Daily Dot. “We do not take the possibility of removing creators lightly. We have a thorough content policy and evaluation process, and removing a creator is something we only consider after very careful review.”

In the end, Patreon stands by its assessment in both cases, judging that the content of each creator had clearly fallen outside its boundary of mainstream acceptability. So, while it’s unclear just how much impact the spamming had, the subversive tactics employed by each group to quell the other ended in both being banished back to the fringes.