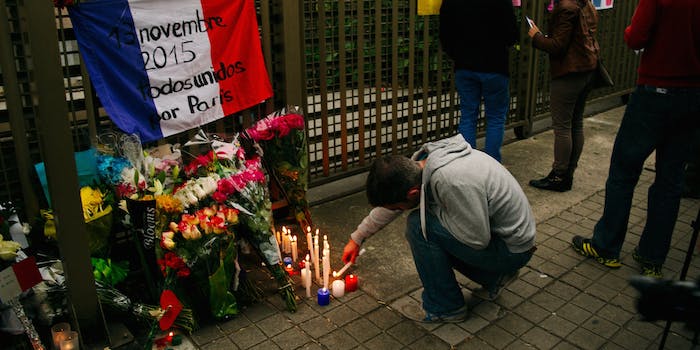 French police stopped one of the eight Paris attackers, but he was mistakenly released.

A multinational manhunt is underway for the only gunman thought to have survived the Islamic State attacks in Paris last Friday, which claimed the lives of 129 people and left hundreds injured.

Authorities are searching for Salah Abdeslam, a 26-year-old French national born in Brussels. Officials say he directly participated in the Nov. 13 attacks, which targeted a stadium, restaurants, bars, and other entertainment venues, which were mostly occupied by young Parisian adults.

Seven other attackers died in the terrorist siege, including Abdeslam’s older brother, Ibrahim, whom police say set off a suicide belt inside Comptoir Voltaire, a café just south of the Bataclan concert hall, where 89 people were brutally slaughtered.

“We noticed absolutely nothing. My two brothers were just normal. We still don’t know exactly what happened.”

In the days following the attack, French police began an express campaign of arrests and detentions, carrying out more than 150 raids across the country. As many as 23 suspects were arrested, with 104 others being placed under house arrest pending further investigation as of Monday.

In addition to a bulletproof vest, police recovered 31 weapons, including a rocket launcher, according to Prime Minister Manuel Valls, who vowed his country would strike back at ISIS “with determination and the will to destroy.”

Now the focus of an intense manhunt, Abdeslam was reportedly stopped by French police in the aftermath of the serial bombings while in a car with two other men headed for the Belgium border. Because his name was not yet tied to the attacks, he was let go.

A third sibling, Mohammed Abdeslam, was reportedly among five suspects questioned and then released by Belgian police on Monday, while two others remained in custody. Stressing his own innocence, Abdeslam told reporters that his family didn’t know his brother’s location.

“We noticed absolutely nothing,” Abdeslam said, “My two brothers were just normal. We still don’t know exactly what happened.”

French officials have also released the name of the alleged “mastermind” behind the well-coordinated Paris attacks: Abdelhamid Abaaoud, a 27-year-old Belgian national of Moroccan origin, has been on the run since January, after evading arrest during police raid on a suspected ISIS cell in the eastern Belgium town Verviers.

According to police, two of the attackers who died on Friday were French nationals living in Belgium—one in the Brussels suburb of Molenbeek, where raids took place on Saturday.

Abaaoud is allegedly the driver of a car, depicted in an ISIS propaganda video, delivering mutilated corpses to a mass grave in Syria. France has also linked Abaaoud to the attack on a Paris-bound train in August, which was thwarted when three unarmed Americans, two of them off-duty U.S. service members, subdued an assailant armed with an AK-47 and nine magazines of ammunition.

Also known as Abu Umar al-Baljiki, Abaaoud reportedly bragged about plotting attacks under the nose of Belgian intelligence agencies during an interview with ISIS magazine Dabiq, according to the Guardian, saying he’d travelled there to “terrorize the crusaders waging war against the Muslims.”

Meanwhile, France’s air force carried out a second day of bombing missions in Raqqa, Syria, dramatically increasing French participation in the schematic Middle East conflict. France did not commit to airstrikes in Syria until September, initially refusing to join the American-led coalition in attacks beyond the ISIS-occupied Iraq border.

France’s sole aircraft carrier, the Charles de Gaulle, has been ordered into the Gulf, where it participated in an 8-week campaign earlier this year targeting militants in Iraq alongside the USS Carl Vinson.

With significant U.S. military assets already in play, the 858 ft. nuclear-powered Gaulle will not broaden the scope of the conflict as much as it will serve to demonstrate France’s heightened resolve in the unremitting war against ISIS.