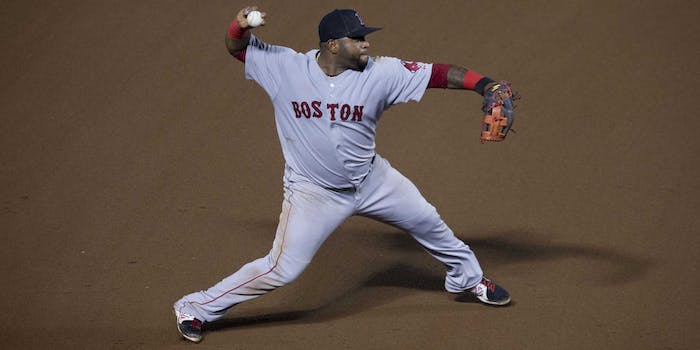 If you’re in the stands at a baseball game, it’s totally acceptable to use your phone to pass the time. After all, baseball games are long and boring. Even Major League Baseball is aware of the problem and has made efforts to shorten the length of the nap-inducing sport.

But if you’re a player on a team participating in the game, you probably shouldn’t be on your phone. Pablo Sandoval has learned this painfully obvious lesson the hard way. The Boston Red Sox third baseman landed himself on the bench after sneaking away in the middle of Wednesday night’s game against the Atlanta Braves to like photos on Instagram.

Sandoval, the owner of three of the finest nicknames in baseball—Kung Fu Panda, Round Mound of Pound, and Little Money—admitted to Red Sox officials on Thursday that he hid away in the bathroom and browsed Instagram while not on the field.

Sandoval benched, admits that was him liking photos of woman on Instagram during game Said he was using bathroom at the time

Sandoval said he met with Cherington, Farrell, apologized but said he was not fined

And he may have gotten away with it too, if only he didn’t like photos of a woman on Instagram. But the act of hitting that little heart gave away his not-so-stealthy creeping. Barstool Sports’ Jared Carrabis caught on and blew up Sandoval’s spot despite specifically saying he didn’t want to blow up his spot.

Major League Baseball has never officially banned phones from the dugout in its rulebook, but in 2010, then MLB Executive Vice President of Baseball Operations Sandy Alderson issued a memo to make clear they were not permitted:

Please be reminded that the use of electronic equipment during a game is restricted. No club shall use electronic equipment, including walkie-talkies and cellular telephones, to communicate to or with any on-field personnel, including those, in the dugout, bullpen, field and–during the game–the clubhouse. Such equipment may not be used for the purpose of stealing signs or conveying information designed to give a club an advantage.

The memo came after the Philadelphia Phillies were accused of stealing signs. In the light of the recent hack by the St. Louis Cardinals of the Houston Astros’ entire internal database, doesn’t seem like such a big deal anymore.

Sandoval is scheduled to make $17.6 million this year and a total of $72.4 million through 2020, which will probably be enough to buy some tissues to dry his tears and bandaids to place over his bruised ego.

Now that he’s benched, Sandoval will have way more time to focus on Instagram instead of those darn distracting baseball games.