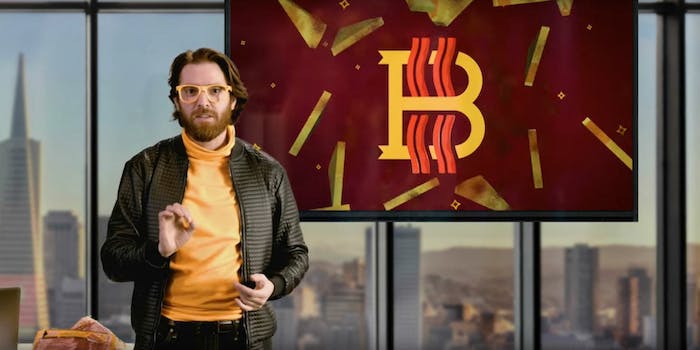 Oscar Mayer, the cold cut company that brought us that catchy bologna song and the Wienermobile, wants in on cryptocurrency, sorta of.

The meat maker launched its own digital coin called Bacoin (bacon + coin), what it says is the “first-ever cryptocurrency backed by the gold standard of Oscar Mayer Bacon.” Starting today, bacon lovers can go to Oscar Mayer’s website and register for a chance to win a Bacoin. If you score one, you’ll be asked to share the campaign on social media to increase the coin’s value.

As you might have guessed, a Bacoin is redeemable for bacon, not real money. Oscar Mayer has a price tracker for how many slices one Bacoin is worth. As of writing, a single coin will net you 28 slices of bacon, or a couple packs of greasy deliciousness. The company warns that, like cryptocurrency, Bacoin is a volatile digital coin, so don’t hesitate to redeem.

Oscar Mayer released an appropriately cringe-worthy promo video to go along with the gag.

The purpose of the marketing ploy is to incentivize users to create buzz about Oscar Mayer bacon by spreading the word on Twitter. While it won’t have any real consequences on the cryptocurrency market, it does show that what was once a hopeful emerging technology with a poor reputation has become mainstream enough to leverage as an ad campaign.

Who knows, maybe Oscar Mayer is on to something. If there is one thing the cryptocurrency market needs, it’s stability. And what could be more stable than the world’s love for salt-cured pork?