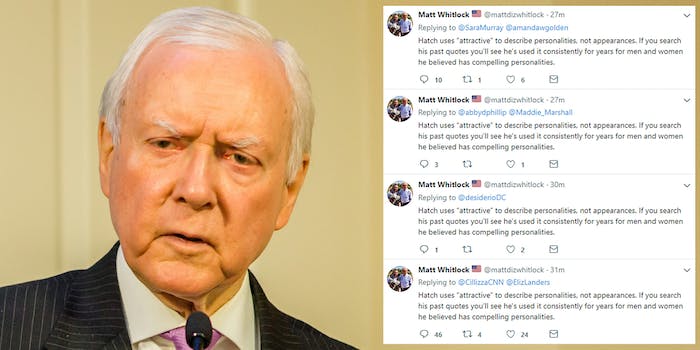 But during a lunch break, some addressed reporters, and in a brief few moments, Sen. Orrin Hatch (R-Utah) made an apparent gaffe, reportedly saying that Ford is an “attractive witness” who is “pleasing.”

Almost immediately, people were upset because a male senator commented on the appearance of an alleged sexual assault victim.

“This is so inappropriate and tone-deaf,” user Archiving Girl wrote.

What is wrong with Orrin Hatch? https://t.co/Eo9lg5rQbq

Holy hell — is every Republican man in the Senate just grotesquely sexist? https://t.co/hpuVEeeWHN

But fret not, in swooped Hatch’s spokesperson, Matt Whitlock, to assure the reporter it was perfectly normal phrasing from the senator, who uses it to describe both men and women.

And then to assure other reporters.

Hatch’s team maintains that the senator’s remarks were not about the witness’ looks. But as noted by another reporter, in a hearing that largely revolves around how the past behavior and accepted norms of men are abominable and need to change, saying, essentially, “that’s how he’s always done things” is a curious defense.