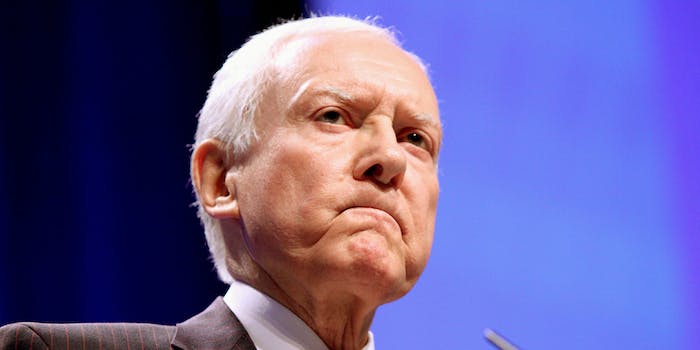 Orrin Hatch announces that he will not seek reelection in 2018

The door could open for Mitt Romney to try and take his seat in the Senate.

Sen. Orrin Hatch (R-Utah) announced on Tuesday that he will not seek re-election in 2018 and will retire after serving in Congress for the past 42 years.

“When the president visited Utah last month, he said I was a fighter. I’ve always been a fighter. I was an amateur boxer in my youth, and I brought that fighting spirit with me to Washington,” Hatch, 83, said in a video posted on Twitter. “But every good fighter knows when to hang up the gloves. And for me, that time is soon approaching.”

Hatch has been a strong supporter of President Donald Trump and his seat could be sought after by someone who has publicly criticized the president: Former Republican presidential nominee Mitt Romney.

Last month Politco reported that Trump was trying to persuade Hatch to seek reelection in an effort to block Romney from being elected.

During the 2016 presidential election, Romney called Trump a “phony” and a “fraud” in a high-profile speech where tried to persuade voters to keep him from winning the Republican nomination.

“His promises are as worthless as a degree from Trump University,” he said during the speech. “He’s playing the American public for suckers: He gets a free ride to the White House and all we get is a lousy hat.”

Romney has also called on Trump to apologize following his much-criticized response to the white nationalist rally in Charlottesville, Virginia in August.

Although there have been rumors of a Romney Senate run in 2018, the former governor of Massachusetts has not spoken publicly about a campaign. In a Facebook post, he thanked Hatch for his service, calling him a friend.