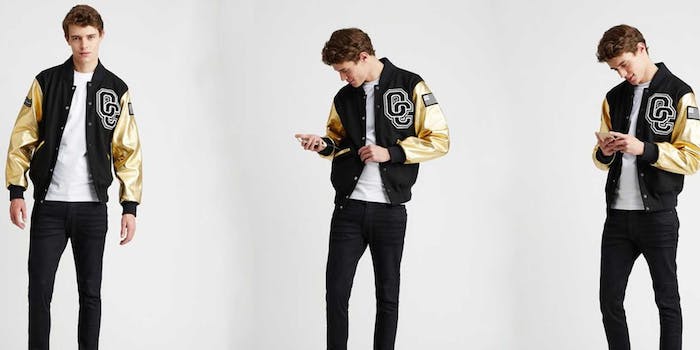 Mophie and Opening Ceremony team up to create phone-charging coat

Battery manufacturer mophie and fashion company Opening Ceremony have teamed up to produce a jacket that’ll charge your phone for you, and it’s really… something.

For starters, it’s not just any old jacket: It’s a letterman varsity jacket. And not a subtle one either: Metallic gold is the name of the game (Opening Ceremony refer to it as the “Midas Touch”). Slip your dying device into the inside pocket, plug in the USB cable, and you’re good to go.

How much will this gleaming vision set you back? A cool $465.

Convenient sure, but at that price? Perhaps not. With a 4000mAh capacity, it’ll barely be enough to charge your phone twice—if you’re lucky—before the jacket itself needs a boost.

But this promo video will make you forget all of the lacking specs, because you’re about to invest in “cool.”

The wearables market continues to expand, and clothing with built-in charging ability is certainly one of the most practical applications. But perhaps we just need the tech upgrade in lieu of an entirely new aesthetic—instead of something that looks like it’s been pinched from Smaug’s hoard.

For the same price as the jacket, you can get your grubby mitts on a more inspired Opening Ceremony collaboration—this time with Intel, on the MICA bracelet, that allows you to check your emails and keep tabs on your calendar.

Sure, there’s debate over the long-term viability of smart watches—but at least you’re not dropping half a grand on a blinged-out battery that you could buy online for the same price as a DVD.