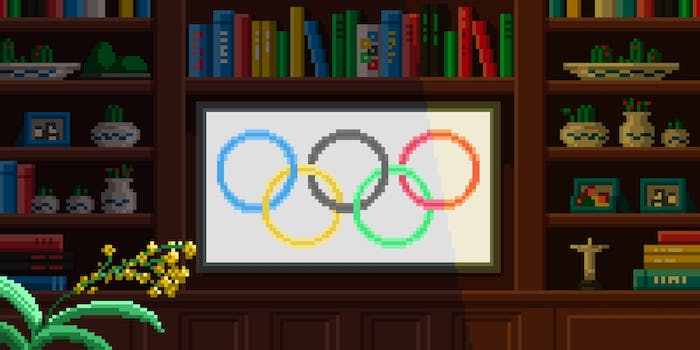 Brazil has the power to shut down the nation's internet. Will it go to such lengths during the Olympics?

Technology has brought a whole lot of surprising complications to the Rio Olympics. The U.S. Olympic Committee has “trademarked” certain hashtags, reserving them for brands over common fans. And, even if you do make it online to post a selfie from the heart of Brazil, your device runs the risk of being infiltrated by hackers.

Those consequences are nothing compared to the very real threat of Brazil enacting a communications jam—that is, shutting down internet networks and potentially felling illegal drones during the course of the Olympics. The move is to be used to counteract potential attacks or infiltration, though it’s unclear what constitutes either.

The article also cites the country’s lack of strong legislation protecting citizens from having metadata accessed by the government. Surveillance is a top issue in Brazil, which may soon come to light if the country enacts a widespread internet blackout while the world looks on.

Access Now, a nonprofit dedicated to human rights by way of connectivity, issued a statement on Friday regarding the potential internet ban: Jamila Venturi, Access Now’s Google Policy Fellow had this to say in a press release:

“We’ve seen worrying encroachments on the fundamental rights of Brazilians in recent months. In this critical moment, the interim government should show the world its commitment to human rights by keeping the internet on. The Olympic Games shouldn’t be used as an excuse to clamp down on free expression or to turn Brazil into a surveillance state.”

Brazil has gone to extreme measures to monitor the Olympics, employing the use of its Simera surveillance system, which uses a series of cameras attached to balloons to monitor events across the Rio metro.

“We can’t predict the likelihood of it happening, only that the conditions are especially ripe for a shutdown: widespread protests, new surveillance tech, and the recent shutdown of WhatsApp in a criminal investigation for the third time,” an Access Now employee told the Daily Dot, citing the most recent case of the encrypted messaging app being suspended in Brazil.

Access Now is encouraging anyone experiencing connectivity disruptions, including blocking or jamming to email them at [email protected].

Already, there has been unrest in Rio. Half a mile from the Olympic opening ceremony, activists took to the streets to protest the economic cost adding to Brazil’s larger difficulties as a country. Police reportedly responded shooting tear gas at demonstrators.