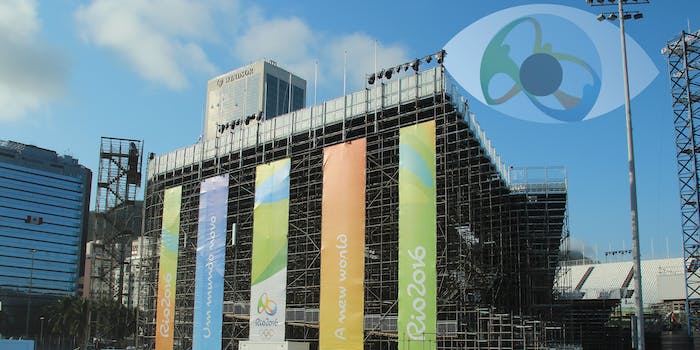 The privacy issue at the Olympics no one is talking about

There's an eye in the sky.

Big Brother is coming to the Olympics in Rio de Janeiro, Brazil.

A collection of high-powered cameras attached to a balloon will be keeping watch over the events. That all-seeing eye in the sky is known as Simera, a product of the Virginia-based Logos Technologies.

Simera is what’s known as a wide-area motion imagery (WAMI) system. It’s the lightweight version of technology that was originally built for use by United States military forces in Iraq and Afghanistan.

While its predecessors weighed an upwards of 1,500 pounds and were mounted on manned aircraft to keep them airborne, Simera slims the system down to just 40 pounds and can be mounted to unmanned crafts like a balloon—otherwise known as an aerostat.

Despite its feathery weight compared to the systems that came before it, Simera is still a powerful sensor thanks to the 13 cameras that scout all angles of the landscape below it. According to Doug Rombough, the vice president of business development for Logos Technologies, the sensor can see an area of 95 square kilometers (about 60 miles) when flown at 1,000 feet.

Mounted on an aerostat, Simera will give officials operating the device 120-megapixel imagery of the heavily traveled areas of Rio de Janeiro for up to three days at a time. It can even focus on specific action with a full-motion camera that is capable of zooming in and capturing additional details.

“WAMI offers a much more expansive view of

the target area, but in medium resolution,” Rombough explained. “By contrast, using a full-motion video camera is like

looking through a soda straw: the view is sharp, but very limited.”

The pairing of the two types of cameras provides a best of both worlds situation: The WAMI sensor can keep an eye on everything, and once an area of interest is identified, the full-motion camera can zoom in for a more detailed look.

Everything captured by those cameras can then be monitored—not just in real time but through footage stored from up to eight hours prior. The onlookers are able to view up to 10 video camera angles at once. The captured footage can be rewatched and interacted with through pan, tilt, and zoom controls.

“These technologies originally were designed for the military and are now being used for constant surveillance of a civilian population.”

The technology is impressive, and its monitoring capabilities have been proven. Rombough said a similar WAMI system was utilized by the Department of Homeland Security for operation in 2012 along the border of the United States and Mexico. The weeklong test run resulted in the arrests of 80 individuals attempting to make their way into the United States.

An eye in the sky

Given how powerful a tool Simera and other WAMI systems can be, it matters greatly who is operating the cameras and how they are being used. In Brazil, four Simera systems will be in the hands of Altave, a contractor hired by the Brazilian Ministry of Justice. Their experiment with Simera will be the first time such a system will be used at such a scale by anyone other than the U.S. government.

Altave and other security firms are sure to view Simera and similar systems as a tool designed to help ensure people’s safety. But the use of these high-powered and potentially invasive cameras raise serious privacy concerns.

According to Rombough, Simera and any other WAMI-style sensor is required to abide by the rules that govern law

enforcement tools. Simera in particular has already been stripped of infrared night-vision capabilities to make it easier to export the device outside the U.S.

“That said, Simera can only see things outside, what’s

already in the public domain,” Rombough argued. He added that the camera resolution on the WAMI sensor can’t make out faces or license

plates, and noted that the cameras can be “a great resource in providing safety for the general

public, particularly if used in disaster relief, firefighting, and search and rescue operations.”

While the WAMI sensor isn’t able to make out the finer details of what it’s looking at, the full-motion camera on board does; it captures imagery at a resolution 60 times that of full HD—and 15 times the resolution of 4K—at three frames per second.

“If the Brazilian government wants to use this invasive technology, they should be required to inform the population how the technology will work and what data will be collected.”

“These technologies originally were designed for the military and are now being used for constant surveillance of a civilian population,” Pallero said. “The potential for abuse must be matched by safeguards, oversight, and transparency.”

He also pointed out that Brazil doesn’t have a general data protection law that would ensure the privacy of the visitors—be it the press, fans, or athletes—who will be attending the Olympics. This presents a potential violation to what Pallero views as a basic human right to privacy.

“If the Brazilian government wants to use this invasive technology, they should be required to inform the population how the technology will work and what data will be collected,” Pallero said. “There must be robust human rights protections to minimize the privacy impact, including clear standards limiting the use and retention of any data collected.”

The lack of clarity surrounding how the footage captured by these monitoring systems is handled is deeply troubling for privacy activists. The devices are new, regulations are sparse, and old laws may not contain language broad enough to apply to them.

But the concern about privacy as a whole isn’t new, especially during major events like the Olympics. During the 2008 Summer Games in Beijing, China, the U.S. Department of State issued travel advisory to warn Americans traveling for the event they would have no expectation of privacy in public or even private places.

No such warning regarding privacy has been given to travelers heading to Rio de Janeiro—though there are plenty of other advisories for them to heed. That might be in part because the United States doesn’t have much room to lecture Brazil after it was discovered the National Security Agency had been spying on top Brazilian officials.

Even without the warning, Brazilian citizens and visitors alike may be interested to know that they may be being watched. There are sure to be plenty of balloons in the sky in Rio over the course of the Olympics, but not all of them will be for celebration.