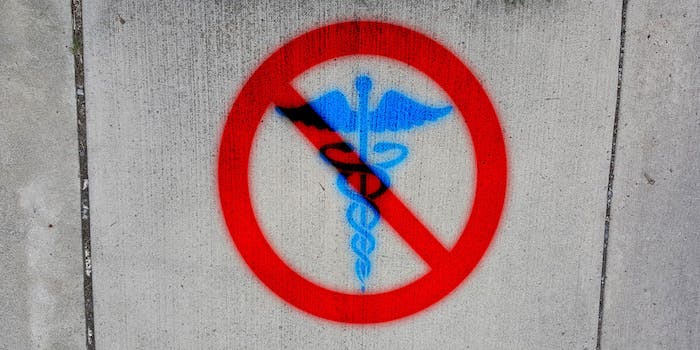 The law will revoke the medical license of any doctor who performs abortion.

Late on Thursday, the Oklahoma House of Representatives passed a bill that fully bans abortion in the state.

Oklahoma’s SB 1552 passed by a 59-9 vote in the heavily Republican legislature. The law is now on the desk of the state’s Republican governor, Mary Fallin, who has yet to address whether she plans to sign the legislation into law. If she does, the state could face one of the most intense federal legal battles on the issue.

The controversial Oklahoma bill manages to sideline abortion services by revoking the medical licenses of any doctor found performing the procedure for any other reason than in cases of miscarriage or severe physical trauma to the fetus or pregnant woman.

Doctors who do perform abortions outside this spectrum may face felony charges.

Performance of an abortion as defined by Section 1-730 of Title 63 of the Oklahoma Statutes with an intention other than to increase the probability of a live birth, to preserve the life or health of the child after live birth, to remove an ectopic pregnancy, or to remove a dead unborn child who died as the result of a spontaneous miscarriage, accidental trauma, or a criminal assault on the pregnant female or her unborn child.

The U.S. Supreme Court’s landmark decision in the 1973 case Roe v. Wade and subsequent abortion cases have found that women in the U.S. have a constitutional right to privacy with regards to their medical choices, including abortion.

According to Reuters, statements made by legislators during Thursday night’s deliberations largely focused on morality and betrayed a devil-may-care attitude about the potential federal battle that is likely to ensue if Fallin signs the bill into law.

“I’ve heard almost every argument today about judicial challenge to this legislation, and after much prayer and study, I ask myself this question,” Rep. David Brumbaugh (R) said on Thursday, according to TPM. “Do we make laws because they’re moral and right, or do we make them based on what an unelected judicial occupant might question or overturn?”

The Center for Reproductive Rights urged Fallin not to sign the bill into law. Amanda Allen, CRR’s senior state legislative counsel, told the Daily Dot in a statement via email that the total abortion ban was “cruel and unconstitutional.”

“Oklahoma politicians have made it their mission year after year to restrict women’s access vital health care services, yet this total ban on abortion is a new low,” said Allen. “When abortion is illegal, women and their health, futures, and families suffer.”

CRR told the Daily Dot in an email that Oklahoma currently has only two abortion providers. CRR has filed eight lawsuits against Oklahoma state abortion restrictions in the past five years alone.

“SB 1552 violates the constitutional rights of people needing an abortion. Its playing politics with the the most vulnerable people and families,” Hernandez said in an email to the Daily Dot. “Setting up a situation where people can’t get the care they need, and then punishes people for attempting to provide their own care, is uniquely sinister.”

On Tuesday, prior to the House passage of SB 1552, the Oklahoma Senate voted in favor of another law restricting abortion. The Prenatal Nondiscrimination Act of 2016 passed by 39-6 after being approval in the House. It would ban abortions performed on fetuses with Down Syndrome or other genetic abnormalities. The legislation would also revoke the medical licenses of doctors who perform procedures on these fetuses.

If signed by Fallin, the law would make Oklahoma the third state in the country, including North Dakota and Indiana, to ban abortions on fetuses with Down Syndrome and other disabilities.