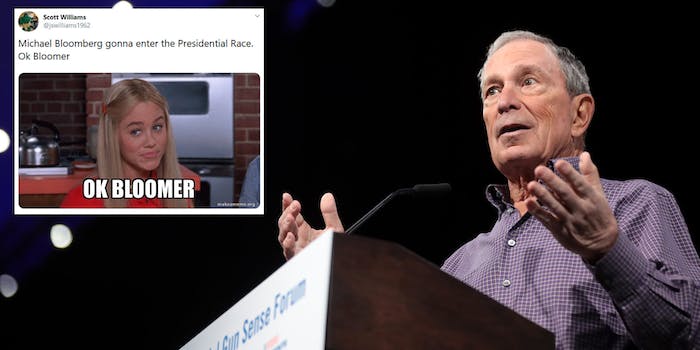 Everyone was on the same page with the joke.

Former New York City mayor and billionaire Michael Bloomberg is preparing to enter the crowded Democratic primary field–and the internet has responded, with thousands of people echoing the chorus of “Ok Bloomer.”

Bloomberg, who was a rumored candidate early in the 2020 cycle, has sent staffers to Alabama to gather signatures to get on the ballot, according to the New York Times. The billionaire has been mulling jumping into the 2020 Democratic primary for weeks, according to the news outlet, and has reached out to several Democrats.

The former New York City mayor has had a bit of a back-and-forth about entering the 2020 foray. Last year, he re-registered as a Democrat, sparking speculation about a presidential bid.

But in March, Bloomberg said he wouldn’t run.

In April, reports came out that Bloomberg was considering joining the foray, especially if former Vice President Joe Biden faltered.

The Times reports that while Bloomberg has sent staffers to Alabama to get the signatures required to be on the ballot in the state, he has yet to make a decision on whether to run. It seems likely he’s going to, according to Axios.

Regardless of whether Bloomberg officially enters the race, the internet didn’t seem too pleased with the idea.

Quickly, “Ok Bloomer” became a way to mock the billionaire former mayor, a play on the “Ok Boomer” meme, which mocks old people for being out of touch.

So grateful for everybody who beat me to #OkBloomer

if we tweet "ok bloomber" @MikeBloomberg enough times we will get him to drop out. we already bullied one billionaire off of the campaign trail. start a movement folks #okbloomer https://t.co/NqNJaJeIvk