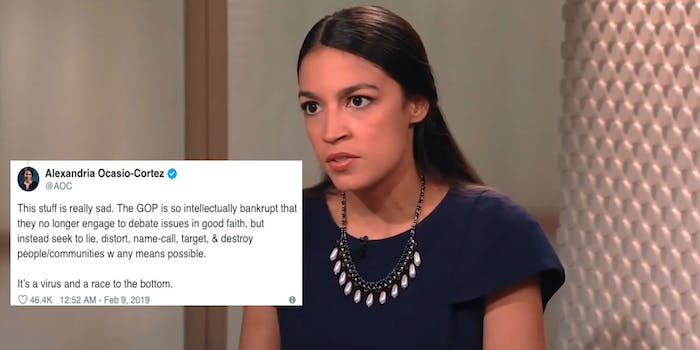 Another day, another clapback.

Alexandria Ocasio-Cortez has become a relentless target for Republicans. She’s had her demeanor at the State of the Union criticized, been told she hasn’t had real-life success, had her wardrobe critiqued, been the subject of countless parody Twitter accounts, had a fake nude photo circulated, and slammed for an old, playful dance video.

Conspiracy theories have circulated online that she’s secretly rich and, more recently, that she has terrible credit. That last one was enough for both Snopes and Ocasio-Cortez to weigh in.

John LeFevre, an author and the man behind Goldman Sachs Elevator’s Twitter account, tweeted on Thursday that Ocasio-Cortez had a bad credit score and a history of being evicted:

He also ventured into a sensitive territory: referring back to when she said she would not be able to afford rent in D.C. until she received her first salary as Congresswoman. When Ocasio-Cortez admitted this back in November, it resonated with many and shed light on how political positions have so far largely been inaccessible to the working class.

LeFevre’s tweet appeared to be based in part by a Jan. 16 Facebook post from someone under the name Donn Johnson, which claimed that Ocasio-Cortez, who had just announced she would be joining the House Financial Services Committee, had a 430 credit score, two checking accounts closed, and “two sheriff evictions.”

Following the claims about her rent and credit score, fact-checking website Snopes rated them as “false” and thoroughly debunked the claims.

Ocasio-Cortez responded to LeFevre’s unverified claims on Twitter late on Friday night, but it lacked her usual sass. Instead, her tone was more of concern of a growing pattern of the GOP supporters resorting to false rumors to bring her down.

“This stuff is really sad,” she wrote. “The GOP is so intellectually bankrupt that they no longer engage to debate issues in good faith, but instead seek to lie, distort, name-call, target, & destroy people/communities w any means possible.”

She added, “It’s a virus and a race to the bottom.”

This stuff is really sad. The GOP is so intellectually bankrupt that they no longer engage to debate issues in good faith, but instead seek to lie, distort, name-call, target, & destroy people/communities w any means possible.

It’s a virus and a race to the bottom.

Ocasio-Cortez is the youngest Congresswoman in history and already has made a name as the politician who became accessible to the public for using her social media platform for discussing politics and for exposing obvious ethical problems in politics in a viral video from a recent House Oversight and Government Reform committee meeting. But even she has her limits, and it’s showing.