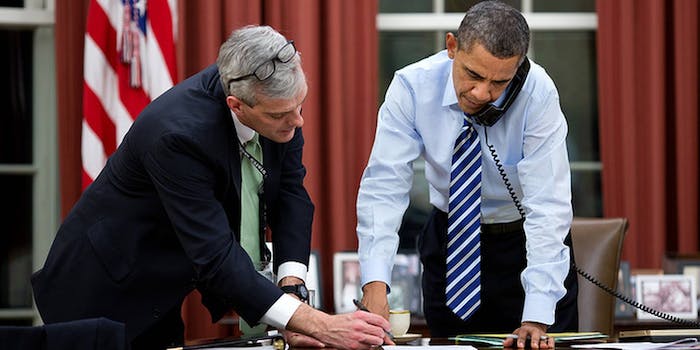 The hashtag #ObamaCareInThreeWords became a trending topic today for the first time since last June.

In the summer of 2012, the Twitter hashtag #ObamaCareInThreeWords enjoyed a brief burst of popularity from opponents of the health-care overhaul. Until Thursday morning, the most recent tweet with the hashtag dated back to June 29, when Speaker John Boehner retweeted a statement by @GOPWhip: “We. Will. Repeal.”

For no apparent reason, the long-dead hashtag rose again today to become one of the top-trending tags in the world, after the White House offered a long-delayed counter: “It’s. The. Law,”  The tweet included a photo of the bill Obama signed in 2010.

Sure, the White House tweeted a factual statement: Obamacare is indeed the law of the land. But it likely won’t persuade anyone who opposes the legislation. It’s a textbook example of the logical fallacy known as “Just Because” or “Because I Said So.”

In response, many Twitter users sent the White House historical examples where the argument “It’s the law” did not prevent people from opposing a particular policy:

So. Was. Slavery. RT @whitehouse It’s. The. Law. #ObamaCareInThreeWords

So was segregation RT @whitehouse: It’s. The. Law. #ObamaCareInThreeWords, twitter.com/whitehouse/sta…

Some of the examples not only broke the hell out of Godwin’s law but stomped the resulting fragments into powder:

Other tweets focused on present-day problems, rather than historical issues.

That said, for every tweet expressing disdain for either Obamacare or the White House tweet about it, you could find one wholeheartedly supporting the plan:

It just goes to show, what goes around, comes back around—even on Twitter.