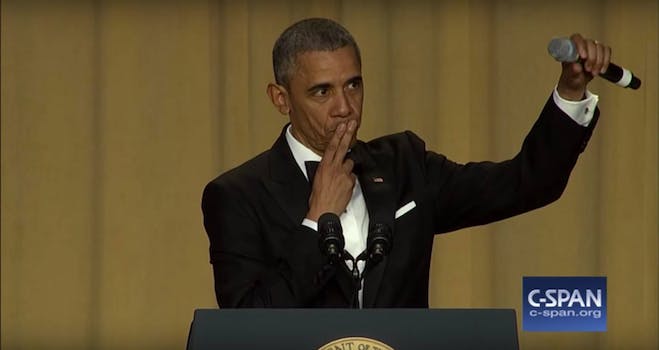 Many people figured that President Obama would drop the mic on his final White House Correspondents’ Dinner Saturday night, but they probably weren’t expecting a literal one.

Obama took the stage towards the end of the night, remarking that this could be the final White House Correspondents’ Dinner and that “the end of the Republic has never looked better.”

From there, Obama didn’t hold back. He took shots at the state of the presidential race, cable TV news (especially CNN), print journalism, the lack of access the press has had under his administration, and his own aging appearance over the years. No topic was off the table for the outgoing president.

He made a passing reference to Game of Thrones’s Red Wedding after joking about trapping Republican senators in the room so they would be forced to talk to his Supreme Court justice nominee, Judge Merrick Garland. And, lest journalists and political junkies be disappointed, Obama went straight for politics’ main punching bag, Donald Trump.

“I am a little hurt that he’s not here tonight,” Obama noted. “We had so much fun that last time, And it is surprising. You’ve got a room full of reporters, celebrities, cameras. And he says no. Is this dinner too tacky for the Donald? What could he possibly be doing instead? Is he at home eating a Trump steak, tweeting out insults to Angela Merkel? What’s he doin’?”

With only nine months until Obama leaves office, he’s already trying to figure out what he’ll do in Washington, D.C. for the next two years while his daughter Sasha finishes up school, offering up a Curb Your Enthusiasm-esque take on his post-presidential life, including one hell of a friendship (and potential buddy-adventure comedy) between Obama and former Speaker of the House John Boehner, who will be able to hang out now that neither of them are in politics.

The speech ended on a serious note, as the president praised the journalists who continue to make the government accountable and inform the public—but not without a mic drop of his own.

“I want to close my final White House Correspondents’ Dinner by just saying thank you,” Obama said. “I’m very proud of what you’ve done. It has been an honor and a privilege to work side by side with you to strengthen our democracy. With that, I just have two more words to say: Obama out.”