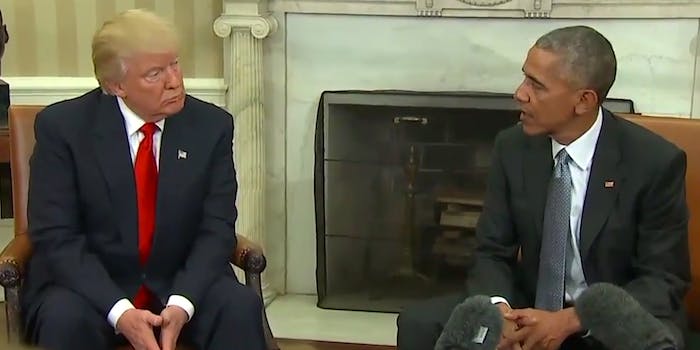 While much of President Donald Trump’s legislative agenda remains hamstrung, stalled, or non-existent, he has been able to accomplish one policy-making goal: undoing laws passed by President Barack Obama. And now that former Vice President Joe Biden has entered the 2020 race, the “Obama vs. Trump” list of initiatives and laws will become front-and-center as Biden tries to rally the nation around the Obama years.

The somewhat progressive Obama era will be the center of Biden’s campaign, like passing the Affordable Care Act and entering into the Paris Climate Accord. But opposing them have been some of President Trump’s proudest accomplishments.

The list of Obama laws undone by Trump is long, spans almost every part of the government, and is added to continuously. Since day one, undoing Obama’s legacy has been Trump’s stated goal, and while many of his less realistic or legally-grounded ideas fall away or are blocked, he never seems to let up from dismantling the work done during the Obama years.

The study, from libertarian think tank the Competitive Enterprise Institute, found that Trump has withdrawn, delayed, or canceled nearly 1,600 regulatory rules that were either existing or in the pipeline after his first year.

A comprehensive list of every Trump rollback of an Obama law is impossible, and would be mired in confusing and conflicting terminology over what a rule really is, and what the difference is between a cancellation and a rollback. But there’s no doubt that Trump has made his administration’s mission undoing almost everything.

Here are some of the most important Obama-era laws and initiatives that have been undone in the years-long “Obama vs. Trump” policy battle.

Obama vs. Trump: What laws and initiatives has Trump changed?

Despite spending his entire campaign thundering about how the Joint Comprehensive Plan of Action to reduce Iran’s nuclear capability in exchange for unfreezing of sanctions was “terrible,” “the worst deal ever,” and would lead to nuclear war, it took Trump over a year to finally pull the U.S. out. He signed the paperwork on May 8, 2018, with increased sanctions taking effect immediately. U.S. sanctions went back into effect in November, while other EU nations continue moving toward normalized trade.

A few days after taking office, Trump signed an executive order pulling the United States out of the Trans-Pacific Partnership, the controversial 12-nation trade pact that would have slashed tariffs, normalized labor laws, and increased environmental protections. Calling TPP “a ridiculous trade deal,” Trump pulled the U.S. out, and the deal collapsed, unable to be ratified.

The other TPP nations came together to sign a different deal without the U.S. later in 2017.

Of all the “Obama vs. Trump” regulation changes, no area has seen a greater shift from progressive thinking to corporate-based regulation than the environment. Trump first wanted to close down the entire EPA, then slashed its budget by over 30%.  In August 2018, Trump’s EPA proposed repealing the Obama-era Clean Power Plan, an effort to decrease American dependence on fossil fuels and coal, replacing them with more sustainable power sources. The power plan Trump submitted as a “revision” was a complete rewrite, jettisoning over 1,000 pages of regulations, and bumping the Obama goal of reducing coal emissions by 32% to just 1%.

Not all of the “Obama vs. Trump” regulation efforts have been completely successful. Despite making nearly 70 separate promises to repeal the Affordable Care Act (aka Obamacare), including on “day one” of his administration, the law still nominally stands, after Republicans in the Senate failed to fully repeal it. Instead, Trump has tried to hobble it, and mostly succeeded. He shortened the ACA’s open enrollment period and massively slashed its advertising budget. He’s also spearheaded the repeal of the individual mandate, which forced people to either have some kind of insurance or pay a small tax.

As a result, signups in the Obamacare insurance marketplace are down nearly 20%.

In June 2017, Trump made good on his pledge to pull the United States out of the “job-killing” Paris Climate Accord, putting action behind his belief that climate change is a Chinese hoax, and that unilateral agreements of any sort undermine American sovereignty.

This made the U.S. one of just three countries in the world to not sign on to the deal. But language in the agreement won’t make the U.S. withdrawal effective until November 2020. This puts State Department diplomats in the awkward position of having to show up for talks regarding a deal they won’t have any role in implementing. Individual cities and towns in the U.S. have also affirmed their intention to abide by the standards of the deal, even if the country as a whole doesn’t.

The Trump administration worked hard to reverse Obama-era protections barring internet providers from blocking or slowing down internet access from competing services, while also increasing the speed of their own services. But the rollback has been slow to implement, and in March, House Democrats introduced a “Save the Internet Act” that would cancel the cancellation of net neutrality. The bill faces a steep challenge getting through the Republican-controlled Senate, and doesn’t address the problem with internet regulations in the first place: They depend on telecommunications laws written in 1934.

In September of his first year, Trump unilaterally ended the program offering legal protection to over 800,000 children of undocumented immigrants brought to the country when they were young. The DACA program was essentially handed off to Congress, the result of being passed through an executive order by Obama when Congress refused to take action on it. Over the next year-and-a-half, DACA stayed alive as a result of lawsuits and court challenges, with a November ruling declaring that Trump didn’t have the power to cancel the program without congressional approval.

It is currently still in limbo as immigration reform in Congress goes nowhere.

The “Obama vs. Trump” regulation battle has slowed down in 2019, but it hasn’t ended.

On Mar. 6, Trump issued an executive order abruptly ending an Obama-era reporting requirement for the Department of Defense to publish an annual report detailing casualties from drone strikes. Following years of criticism over the lack of transparency in reporting on drone actions in the War on Terror, Obama signed an executive order in July 2016 mandating that the numbers be made public in an annual, unclassified report. Trump didn’t issue one for 2018 and rolled back the requirement permanently for 2019.

Overall, Trump’s war on regulations led him to declare that he’s cut more than any American president in history (this isn’t clear) and cut 22 regulations for every one he’s signed (a misleading comparison). But while the results of Trump’s rollback of Obama laws won’t be known for years, the effort is real. The “Obama vs. Trump” regulation comparisons could also become a central tenet of the president’s reelection campaign if he squares off against Biden.