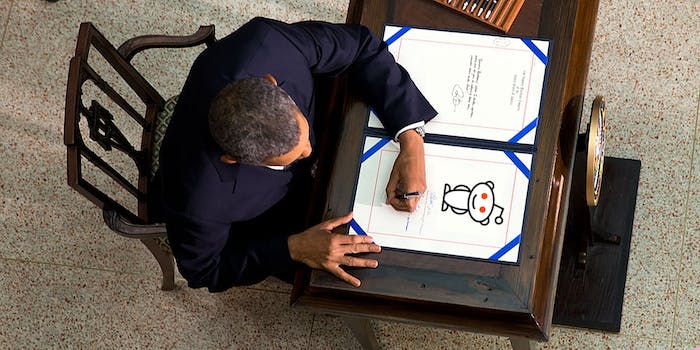 Obama thanks Reddit for its role in net neutrality victory

This wouldn't have been possible without Reddit and other activist communities.

The FCC‘s Thursday vote to adopt strong net neutrality rules capped years of activist pressure on the agency, much of it from communities like Reddit. So it’s only fitting that, after the vote, President Barack Obama—who called for these rules in November—sent redditors a handwritten note thanking them for their commitment to the cause.

Reddit cofounder Alexis Ohanian revealed the note to the community in a blog post about the FCC’s historic decision.

“Thanks Redditors!” the note reads. “Wish I could upvote every one of you for helping keep the internet open and free!”

Accompanying the handwritten note was this longer message:

Earlier today, the FCC voted to protect a free and open internet—the kind of internet that allows entrepreneurs to thrive and debates over duck-sized horses and horse-sized ducks to persist.

This would not have happened without the activism and engagement of millions of Americans like you. And that was a direct result of communities like reddit.

So to all the redditors who participated in this movement, I have a simple message: Thank you.

Obama has long advocated for using venues like Reddit—where he did an AMA in August 2012—to reach young people where they already were, instead of expecting them to tune into network TV interviews just to hear from him.