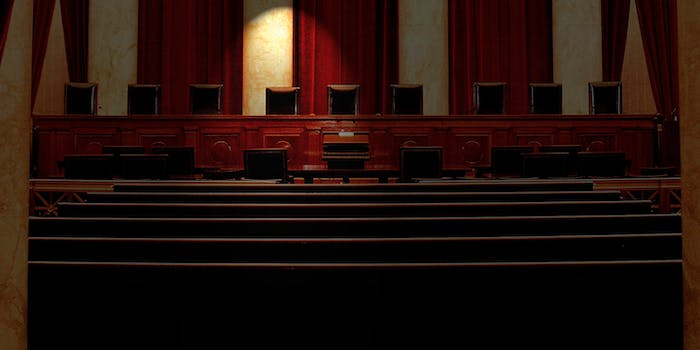 Democrats are pressing the Republican-controlled Senate to give President Obama‘s Supreme Court nominee a hearing.

Senate Majority Leader Mitch McConnell (R-Ky.) has said that the next president should appoint a replacement for Associate Justice Antonin Scalia, who died on Feb. 13. But Obama has about 300 more days in office and has said he intends to nominate a replacement, as the Constitution directs him to do.

The average amount of time a Supreme Court justice has waited to be confirmed in the past is 25 days. But Republicans on the Senate Judiciary Committee unanimously agreed Tuesday not to consider an Obama nominee.

With the Court hearing cases on abortion, LGBT rights, and so-called “religious freedom” laws, liberals are keen to see Scalia’s replacement side with them.

To build pressure  on the Senate to act, the Democratic National Committee announced a new media campaign called #FillTheSeat, kicking off a week-long series of single-issue videos illustrating the impact that blocking a replacement justice could have on major upcoming cases.

The first video in the series starred a group of LGBT DNC staffers and allies explaining how a new justice could shape the future of LGBT rights.

On Monday evening, Rep. Jared Polis (D-Colo.) and Rep. Mark Takano (D-Calif.) hosted a press conference to discuss what they saw as the stakes of the open Court seat, also focusing specifically on LGBT rights.

“Our community’s history with the Court dates back far beyond the marriage cases, and will continue into the future as we continue striving to achieve full equality,” Polis said on a call with reporters. “It’s still legal for private employers to fire someone for being gay in 28 states and for being trans in 30 states.”

To emphasize the importance of rulings from the nation’s highest court, Takano cited several historic cases with outcomes that devastated the gay-rights movement, including Bowers v. Hardwick, the 1986 case upholding state sodomy laws.

“Officials in Mississippi are still refusing to allow same-sex parents to adopt children,” Takano told reporters on Monday night. “And as Congressman Polis said, it’s still legal for private employers to fire someone for being gay in 28 states and for being trans in 30 states. All of these issues and more could make their way to the Supreme Court in the coming years.”

Asked what would happen if Republicans blocked Obama’s nominee, Earl Folks, chairman of the DNC’s LGBT caucus, described such a move as outrageous and unconstitutional.

“The reality is, it’s never taken more than 125 days for a vote on a successor to the Supreme Court,” Folks told the Daily Dot on Monday. “Anything beyond that is unimaginable. If you don’t like the nominee, vote him down—but don’t block the president from doing his job.”

“We’re starting a strategy of trying to make sure that there is no blocking,” he said. “If the Republicans make it clear that they want to block the nomination, they can’t constitutionally do that. They have an obligation to our country to accept the President’s nomination.”

On Tuesday morning, Reps. Polis and Takano bolstered the plan by announcing the launch of Equality PAC, a new endorsement committee linked to the Congressional LGBT Equality Caucus.

“Equality PAC will work to increase the number of lesbian, gay, bisexual, and transgender people elected to federal office,” the caucus said in a statement, “and support straight, cisgender allies who champion LGBT equality.”