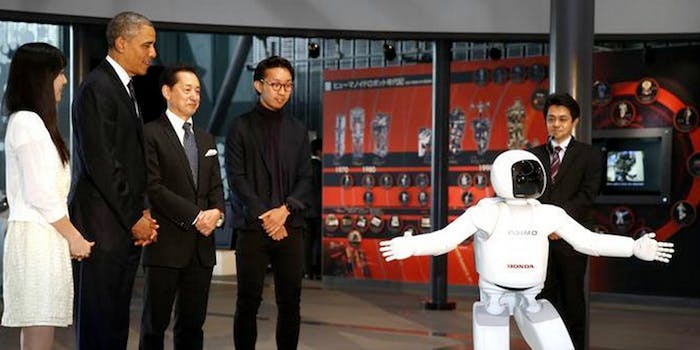 Is this what the future of sports will look like?

Barack Obama is in Tokyo this week getting to know its robot soccer players.

The leader of the free world checked into the National Museum of Emerging Science and Innovation Thursday to take stock of a recently renewed 10-year scientific collaboration agreement between Japan and the U.S. Obama saw all kinds of stuff there, but the winner—the one getting the most national attention at least—was this soccer playing robot blessed with a Premier Leaguer’s touch.

Honda’s humanoid robot ASIMO, which looked like a member of Daft Punk got miniaturized, popped out into this circular playspace midway through Obama’s tour of the facility and began to perform a series of exercises. Talking the way you’d expect a robot to talk, ASIMO offers to play pass with the president, who, perhaps out of obligation, smiles and says “Come on.”

The president trapped the ball like an 11-year-old, then smiled again and focused his attention elsewhere. Later, he told an audience of students that ASIMO’s realism was slightly intimidating, though he also considered it “amazing.”