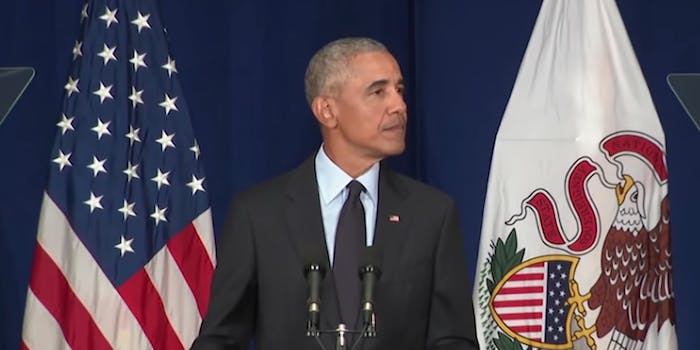 'How hard can that be, saying that Nazis are bad?'

Former President Barack Obama openly criticized President Donald Trump and the Republican Party on Friday in a call for Americans to restore “a healthy democracy” in the upcoming midterm elections in November.

Obama held nothing back in what are his first public criticisms of the president, a scathing critique delivered to students at the University of Illinois-Urbana Champaign.

Slamming the president as a “bully,” Obama picked apart his successor’s policy decisions and actions. In particular, Trump was criticized for his treatment of the Department of Justice and FBI as well as his response to the deadly white supremacist Unite the Right rally in 2017.

“How hard can that be, saying that Nazis are bad?” Obama joked.

The former president was keen to widen his focus, however, and said that Trump was merely a “symptom” not the “cause” of a sick political culture.

“It did not start with Donald Trump,” he said. “He’s just capitalizing on resentments that politicians have been fanning for years, a fear and anger that’s rooted in our past, but it’s also born out of the enormous upheavals that have taken place in your brief lifetimes.”

The former president criticized the Republican Party as the great enabler of Trumpism but specifically slammed it for withdrawal from the global climate agreement, “subsidizing corporate polluters with taxpayer dollars,” sabotaging of the Affordable Care Act and “cozying up to Russia.”

Obama made it pretty clear his belief that the impending midterm elections in November are an opportunity to change the course of the Trump presidency.

“In two months we have the chance, not the certainty, but the chance to restore some semblance of sanity to our politics,” he told the students. “One election will not fix everything that needs to be fixed. But it will be a start. And you have to start it. What’s going to fix our democracy is you.”