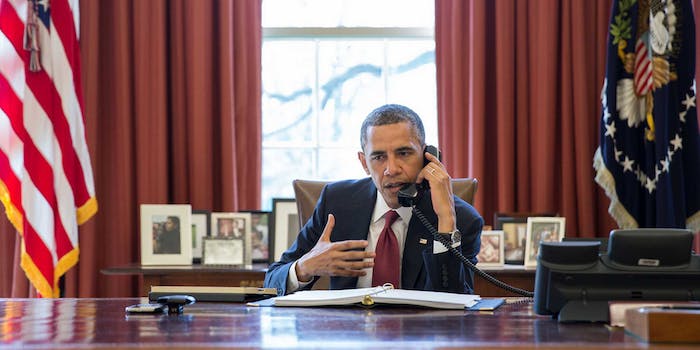 But to help fix the beleaguered Healthcare.gov, Obama will turn to an actual team of rivals as he invites some of Silicon Valley’s leading executives to the White House today to discuss the federal online insurance exchange, along with ongoing national security surveillance programs.

This morning, the president met with leaders from Google, Microsoft, Apple, Facebook and Twitter among others. The stated purpose of the meeting was to cull ideas from the private sector about how to continue improving the federal insurance exchange. As of last week, MSNBC reports that only 365,000 Americans have successfully selected a private insurance program through the Web portal, with another 803,077 being deemed eligible for Medicaid or the Children’s Health Insurance Program (CHIP). That’s well below the 3.3 million enrollment goal the administration hoped for by the end of the month.

“President Obama will meet with executives from leading tech companies to discuss progress made in addressing performance and capacity issues with HealthCare.Gov and how government can better deliver IT to maximize innovation, efficiency and customer service,” a White House spokesperson said. “The meeting will also address national security and the economic impacts of unauthorized intelligence disclosures.  Finally, the President will discuss ways his Administration can partner with the tech sector to further grow the economy, create jobs and address issues around income inequality and social mobility.”

As Politico points out, “It’s not clear what the administration hopes to accomplish by inviting the tech bigwigs to the White House.” Though talk of a tech surge to fix Healthcare.gov back in October fueled speculation that Obama would reach out to these Silicon Valley leaders then, this is the first meeting these excutives have had with the president on the subject.

Though the administration would certainly jump at any new ideas for encouraging broader Healthcare.gov participation, a substantial portion of today’s meeting will likely center on the two-ton elephant in the room: government surveillance.

Since the Edward Snowden’s leak of classified information about National Security Agency domestic spying activities earlier this year, tech companies and the federal government alike have faced harsh blowback from privacy advocates and U.S. citizens. Many of the tech companies represented in today’s meeting were cosignatories on a strongly-worded public letter last week condemning the practice of bulk data collection and asking for reforms.

Earlier this week, a federal judge ruled that the practice of collecting bulk phone metadata may be unconstitutional.

Photo by the White House/Flickr